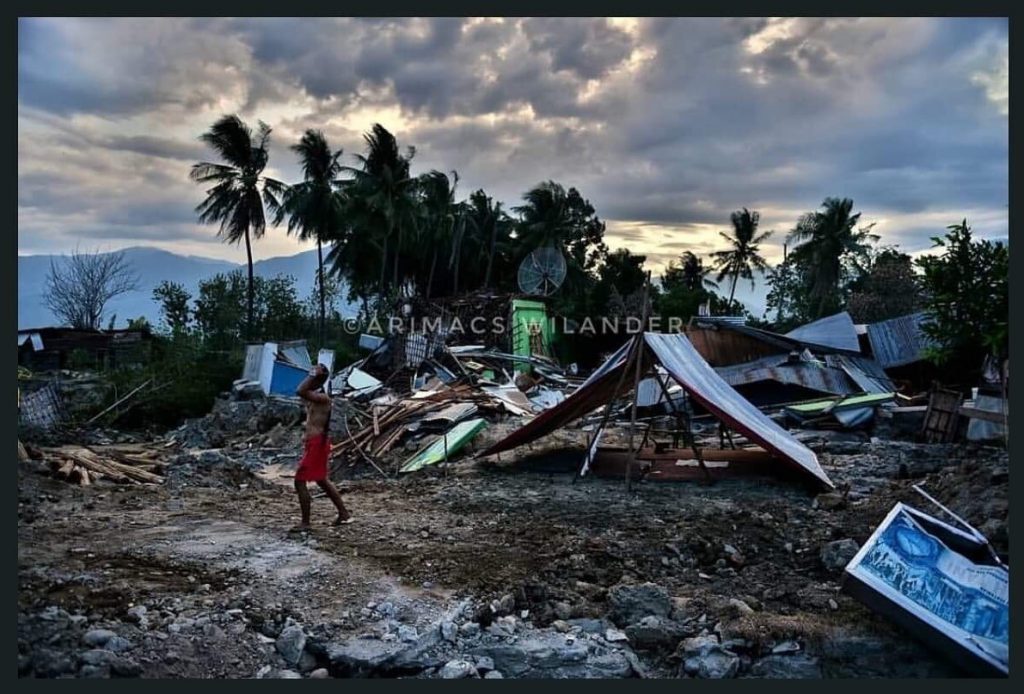 Resident in the aftermath in Sulawesi, 6th October, 2018. Photograph used with the kind permission of Arimacs Wilander

This has been a week of emotional extremes. This morning I have found myself reflecting on that fact and trying to understand what it has taught me. In the process of my pondering, I’ve come to realise that the common thread that has run through my week is empathy.

Humans have the amazing ability to empathise with others. We are able, or try to imagine, being in another’s shoes.

I have done my best over the past few weeks to push open doors in an attempt to get Princess Sophia’s message heard. Last Saturday, at long last, a door opened that resulted in me becoming a guest speaker on a local radio show (You can listen to the resulting show here).

It was very exciting being allowed into the local BBC studios. I was nervous and excited in equal measure.

I found myself, live on-air, explaining why I felt compelled to use my phoenix to raise money to help the victims of the Indonesian tsunami. Although I had thought about it before, I hadn’t really arrived at a satisfactory explanation. It wasn’t until I was put on the spot in that interview that I uttered the truth.

Loosing my dad earlier this year was devastating in a way that only others who have lost someone so close can begin to understand. When I heard about the tsunami on the news and the devastation that the eighteen foot high, 400 mile an hour waves had wrought, my heart went out to the victims. It had been bad enough for me to lose my beloved dad when supported by the amazing NHS staff and my family and friends. And afterwards, I could return home, curl up in the comfort of my bed, watch mindless television and walk my dog to help me cope. The idea of loosing one or more loved ones, as well as my home, my community and livelihood is incomprehensible to me. Everything that we take for granted, wiped away. The idea was appalling. I couldn’t not help.

And so I have cheerfully sat every day in the comfort of my home, surrounded by my loved ones and stitched away, happy in the knowledge that I’m not only creating something beautiful but that Princess Sophia’s wisdom is helping raise funds to help countless people’s lives in that far away land.

This week, following my radio appearance, the support has flooded in. Not from strangers but from those who I count my blessings to have in my life. So many friends, family and acquaintances.

Yesterday we buried a beautiful flame-haired soul, my wonderful fun-loving mother-in-law. As expected, it was a very emotional day, but strangely reassuring and comforting too. Sat in the chapel, there behind the altar etched into a huge glass pane, was a phoenix. The Resurrection. A fact that I realised later wasn’t lost on many of my family too.

They had travelled a long way to pay their last respects and to take comfort in being with friends and family. In being present with them, I felt an immense sense of belonging. I was exactly where I should be.

There is an enormous sense of gratitude that takes a hold in moments like that, when you are able to share and empathise with others.

The knowledge that you are not alone in your pain and that by simply being there for one another makes us strong enough to bear whatever tragedies life throws at us.

We are each of us a phoenix. We are stronger and more resilient than we can ever imagine possible, but most especially when we support each other. Our ability to empathise with each other is a gift.

And I am extremely grateful for it.

Until next week lovely friends and followers

Much love to you all

Having completed attaching all the covert feathers to the upper side of Princess Sophia’s wings last week, I began sewing them to the underside of her wings. But I had an audience today.

I covered her in a somewhat unsightly raincoat made of two clear bin bags and carried her up to my local church in the pouring rain to take part in the Christmas Fayre.

On arrival, Princess Sophia brushed down her ruffled feathers and began putting on a marvellous display, capturing people’s hearts and imaginations. Lots of children instantly recognised her as being a phoenix, similar to the famous Fawkes from Harry Potter, which was immensely gratifying and humbling.

We raised an additional £43 to add to the growing fundraising pot.

In the evening I received an exciting phone call from the producer of a weekend radio show. Princess Sophia and I were invited to join Nick Girdler in the BBC Radio Solent studios the following morning!

Up bright and early, Sophia and I decided that Minima, Valentina and Servo should join us. I especially felt the need of the closeness and protection of my gargoyle to give me courage.

The interview went far better than I could have imagined. I was flooded with compliments afterwards and contributions to my fundraising have continued all week as a result.

Sophia’s wing coverage continued once more in the evening.

I began making lots of feathers once more, ready for the final push to get Princess Sophia completed in time for her raffle.

My fundraising reached £400! Sophia and I celebrated by trying out different feather combinations for the final layer of feathers along her wings.

Happy with our chosen colours, I began sewing the final layers of wing feathers in place.

With only ten days to go, I almost completed the top of one wing. I’ve another three sides to go and her neck feathers yet though.

An early start to complete a minimum hour on Sophia today.

I’ve more important things to attend to, like being truly present for my husband and family as we say goodbye to our own flame haired Princess, Irene.

Thank you so much everyone. 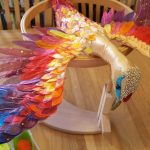 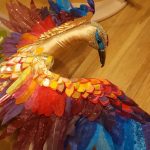 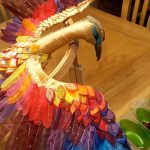 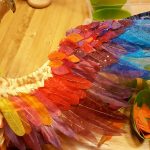 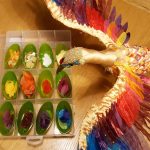 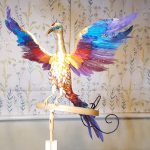 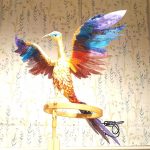