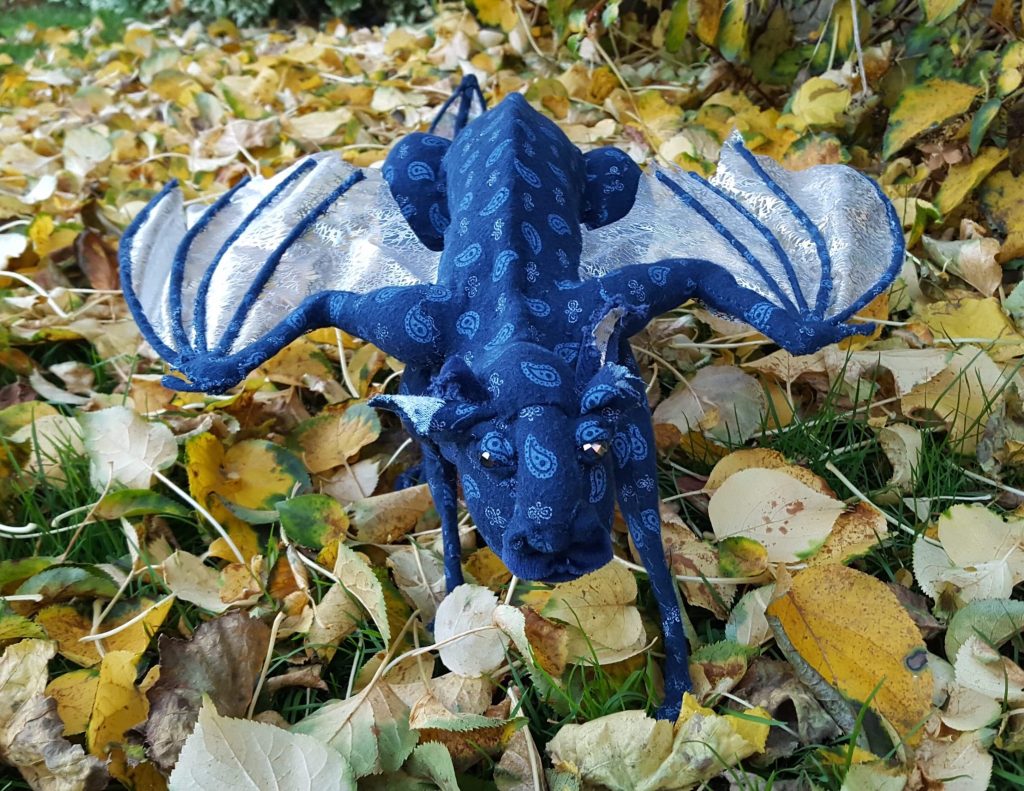 Sometimes things happen that we cannot begin to explain or to understand.

I would like to introduce my latest creation and tell you the story of how he came into being. And why he is so important to me.

Unlike my other creations, who I discover in my imaginary Concordia’s World, this little chap arrived completely of his own accord. And he is very, very special.

In January this year, my darling dad died. I was there by his side until his last breath. It was heartbreaking.

When I returned to the hospital to collect the death certificate, I was also handed a bag of his belongings. Now I knew how meticulous I had been in collecting everything before I had left him that final time, so I was completely unprepared for being handed his beautiful brush cotton, Paisley patterned nightshirt. And of course I’ve not been able to let go of it since.

When I was given the opportunity to attend Bryony Jennings three-day textile sculpture workshop, there was no question in my mind what fabric I would take to use. I have no idea where the compulsion came from, only that I had to take the nightshirt and use it.

I won’t lie, it was challenging to actually cut into the precious garment, to begin the creative process. And the first day of the workshop was understandably emotional. The afternoon session, creating my creatures face, didn’t go at all well.

I had wanted, intended, to create a version of my little stone Bernie dragon, the one that Mum bought for me after dad died and which I named after him.

The nightshirt clearly had other ideas.

After an awful nights sleep I woke on day two, determined to put my creation to rights. As I drove along the motorway I listened to Classic FM.

Debussy’s beautiful melody, Clare du Lune began to play. I hadn’t heard it since it was played at dads funeral. Was he really with me?

I arrived at the workshop a good ten minutes before everyone else and immediately unpicked and removed all of the previous afternoons work. Then I set too and built a new face.

I added dark grey shiny, mirror-like beads for eyes and scraps of fabric became his mouth, a nose, the ridges over his eyes and ears.

I had absolutely no idea what I was making, only that I did what felt right. It was almost as though I was an observer as my hands worked.

Little by little over the next two days my creature took shape, until by the end of the third day he had four legs, one partially constructed wing and one wing skeleton.

The other four wonderfully talented ladies at the workshop had created beautiful, recognisable animals. I still wasn’t at all sure what my strange little dragon-like creature was.

It wasn’t until the next morning that I realised what I had created.

Somewhat worried about how my elderly, religious mum would react, I contacted her to explain. She arrived on the doorstep a short while later, eager to meet the new arrival.

And bizarrely, she loved my little creation.

I had made a gargoyle. 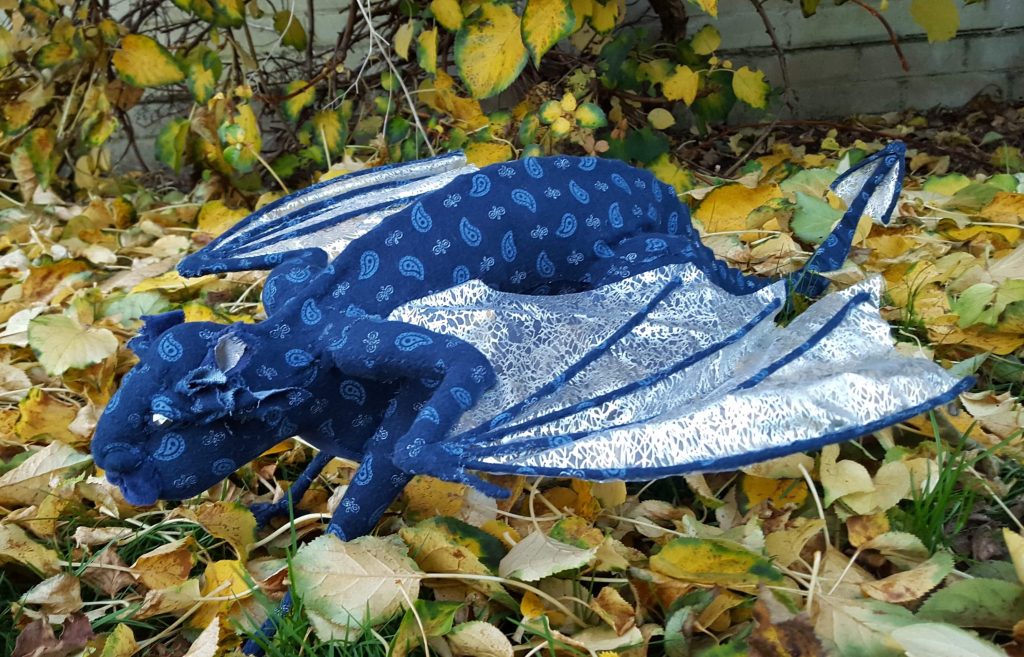 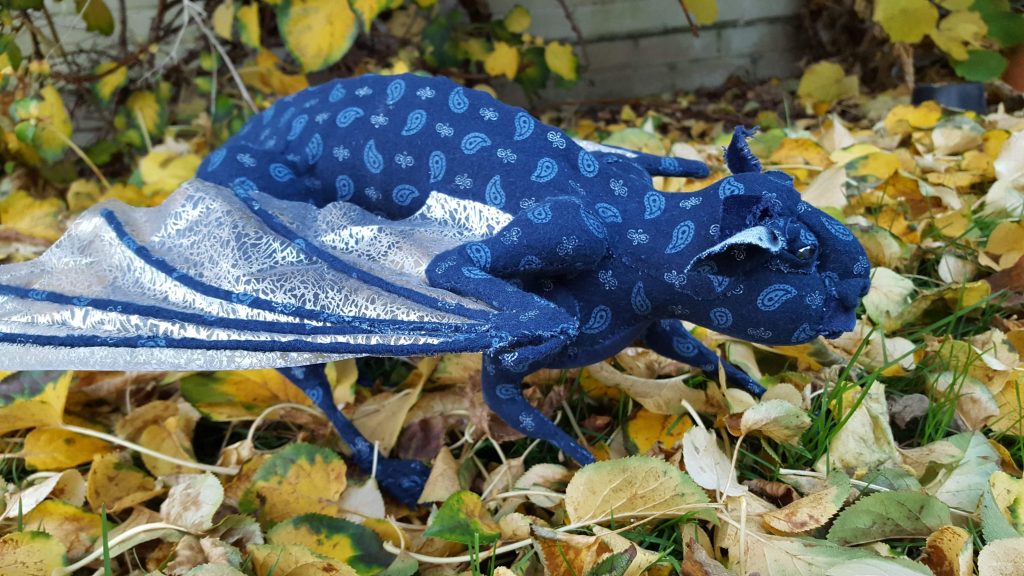 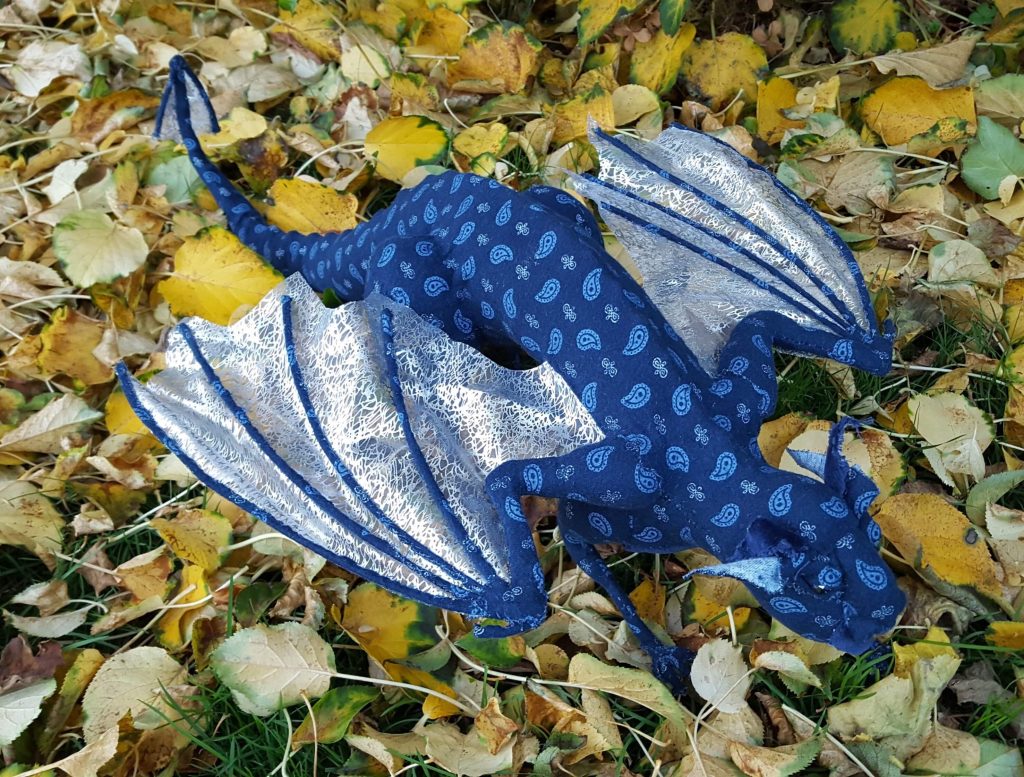 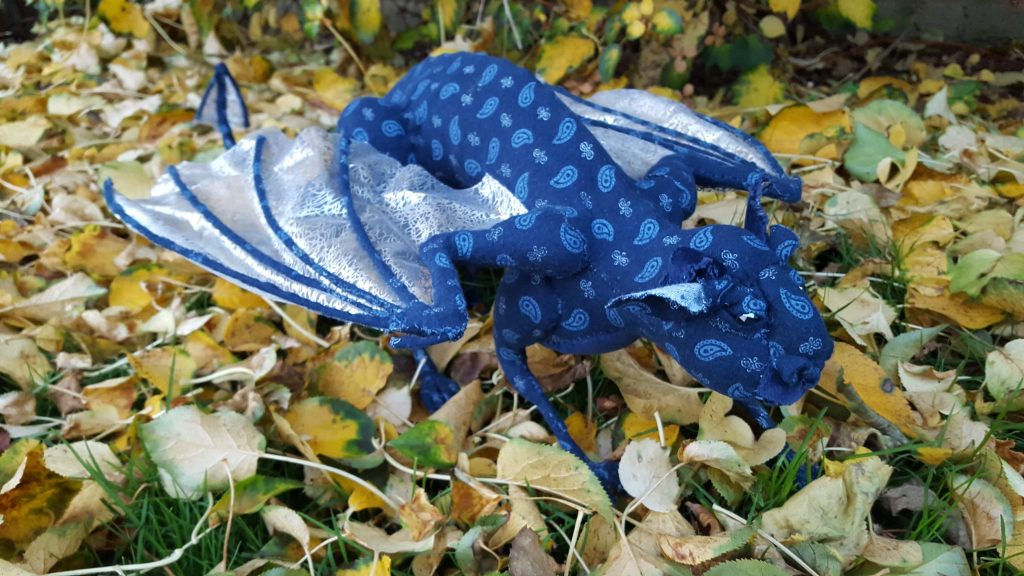 Gargoyles, in case you don’t know, are the somewhat grotesque creatures built into the stonework of churches. Traditionally designed as waterspouts to carry rainwater from the church roof and away from the sides of the building. But they also have another purpose.

In ancient times it was thought that gargoyles were full of apotropaic magic, turning away harm or evil influences. Evidence has even been found of them in ancient Egypt. The word Gargon is derived from the same root as the Sanskrit ‘garjana’ meaning the guttural sound made by a growling beast.

It seems highly appropriate that Dads nightshirt has become a symbol of protection, a magical creature to watch over me and my precious Concordia’s World.

I have named him Servo, from the Latin servus, meaning guardian. The verb servus means I protect, keep, guard, watch over, just as my dad always did in life.

And I love that the entomology of the name has a similar sounding word in Latin that means hero. Dad was my hero.

And now his nightshirt has become a deeply personal reminder of him to keep me company and to remind me daily of what a truly remarkable man he was.

My research into gargoyles also led me to find out some unexpected related facts.

In ancient times, eyes were frequently exaggerated or painted on objects to ward off the evil eye. Mirrors and other shiny objects were also thought to deflect the evil eye, that dreadful curse that caused misfortune or injury.

So I can’t help thinking how appropriate it is that Servo’s eyes are shiny, multi-faceted and mirror-like.

They give him a real glint to his eyes, just like dads.

This week I have needed to feel him close by as we unexpectedly lost my happy, fun-loving mother-in-law. So I am once more filled with grief.

But I am also filled with such immense gratitude.

She passed quickly so I’m grateful that she didn’t linger and suffer like dad did.

My recent experience has enabled me to offer help, support and advice to my husband and his family.

And I am grateful for her life, her selflessness in helping others and that she never, in her difficult life, stopped smiling.

This morning as I write, I’ve realised that I am also grateful that my grief hasn’t held me back in pursuing my purpose in life. I am able to take comfort in my creativity and in sharing my love for what I do with others.

It took me a while, but I now know how very, very important gratitude is in the healing process.

“Grief never ends….. But it changes. It is a passage, not a place to stay. Grief is not a sign of weakness, nor a lack of faith….It is the price of love”         Credit: Power of Positivity

This weeks blog is somewhat somber, but hope that it brings my loved ones some comfort.

No life is without reason. We all bring our own uniqueness, our own qualities that bring love into the world. And we continue to spread the love of those we lose, through our own lives.

And we learn to be grateful for having had them and their love in our lives.

Much love to you all.

I had a very enjoyable, if a little late, creative hour making lots of tiny golden feathers whilst watching the movie Notting Hill.

After weeks of deliberation about the shape and colouring, I began making Princess Sophia’s wing feathers.

She asked me for passive soaring wings, like an eagles. She explained that the long primary feathers with gaps between them will help her help to take advantage of the columns of rising hot air, allowing her to soar even without any reliable wind current. Perfect, don’t you think?

As I made them, I could very well imagine her inspecting them to consider if they were good enough.

I finished creating her primary feathers and began production of her secondary wing feathers. She’s been watching my every move.

I created yet more feathers.

I finally finished creating the primaries and secondaries, all fifty-four of them! It took far longer than I thought.

I began attaching the feathers, twenty-seven to the first wing and…..

….twenty-seven to the other. So she now has her finished wing span of approximately 66cm (27″). And she’s absolutely delighted!

Following her recovery from a nasty case of flu, I sent a draft mentoring proposal of my ideas and expectations for the process, to a lovely talented artist. She is now considering it, so I’m waiting to find out if she will agree to mentor me to help me to become a professional textile sculpture artist. So exciting! 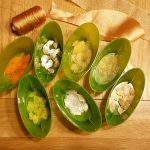 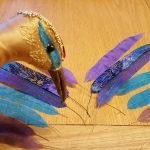 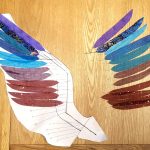 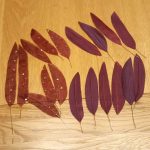 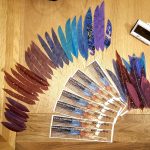 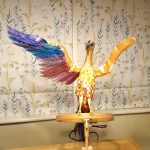 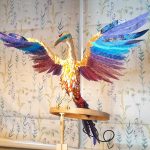