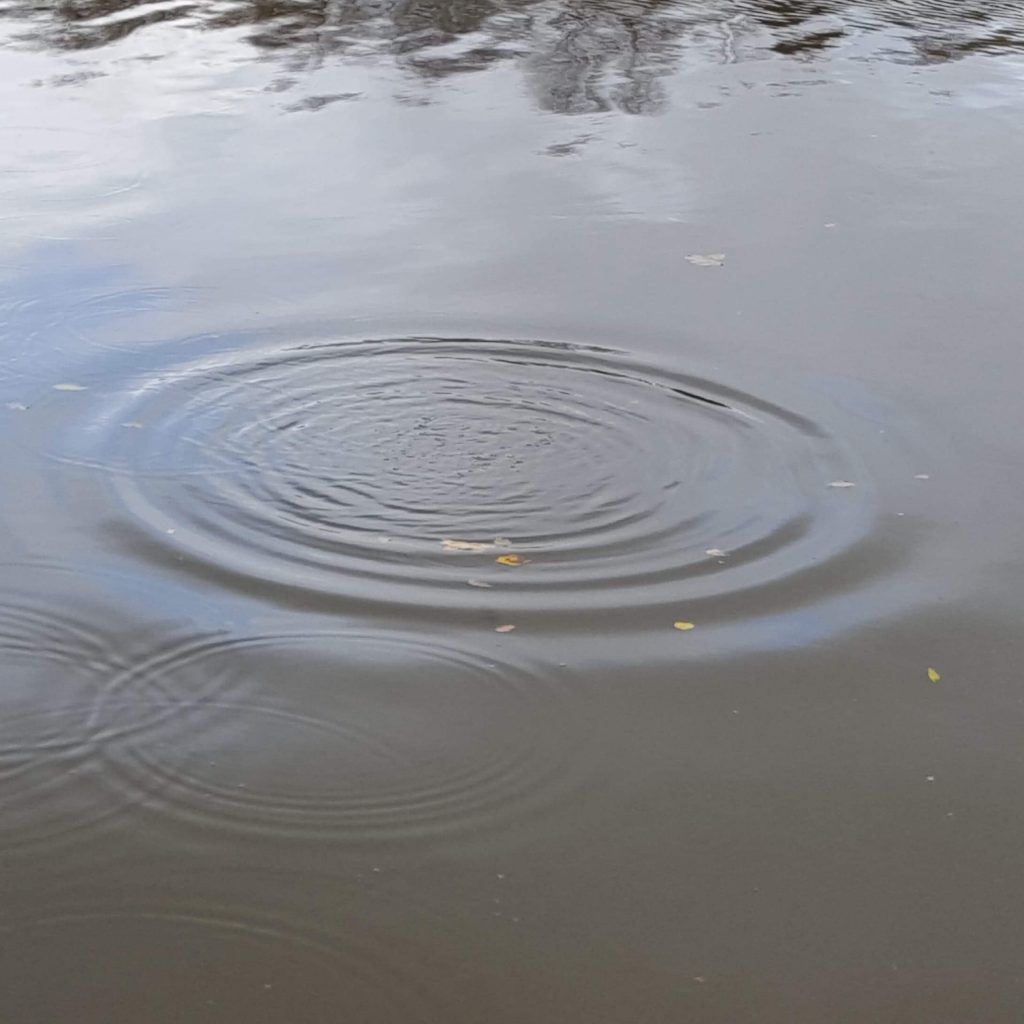 I’ve become fascinated how small actions can accumulate to create a massive impact.

That’s what has happened with my 100 day project. My original idea was simply to encourage a better daily routine and give greater priority to my creativity. I had absolutely no idea what I was truly letting myself in for.

Each day I’ve turned up and put in one hours work on my Phoenix. But then, as the days have passed and my Phoenix has become more real, more tangible, my project has morphed into something much bigger.

I think my choice of project has helped, especially when I then linked it with fundraising efforts to help #savethesurvivors of the Indonesian Tsunami.

Just an hour a day.

And it’s changing my life beyond belief.

How is it that working on a project like this has given me the courage to make contact with such influential people, to reach out and shout about what I’m doing?

Well, I’ve also been using Mel Robbins 5 Second Journal each day since I began. It includes a confidence corner section, providing a small task to perform each day, pushing you gently along to help build self-confidence.

The journal has now finished, but I’m still using the technique. Confidence building has become a part of my daily routine – each morning I ask myself: what small action can I take today to push me out of my comfort zone?

So I’ve reached out each day, and as I’ve done so, my head says “see, that wasn’t so bad was it?” And the following day I feel able to push myself just that little bit further.

It sounds mad, but yesterday morning I found myself emailing Julian Clegg on BBC Radio Solent and even the The One Show! They may not ever contact me, but hey as the saying goes, if you don’t ask, you’ll never know?

I’ve also noticed that the little voice in my head that says horrible things (worse than any troll ever could), has become quieter and quieter. In fact until I wrote this, I hadn’t realised just how quiet it’s become.

There are now only 30 days left of my challenge. Just 30 days in which to finish Princess Sophia.

My Just Giving page total has reached £150, that’s 30 chances of someone owning my Phoenix. My target is £500.

On 9th December I will hold the raffle to see who has won the right to become her owner. And then I’ll be carefully packaging Sophia, saying goodbye and wishing her a happy life as she flies off to her new home.

30 days in which to see if I can encourage as many people as possible to donate in aid of the DEC’s Indonesian Tsunami Appeal.

So I’ve a huge favour to ask.

Will you help me please?

I need you to help me create ripple effects across social media, by sharing the hell out of my Facebook and Instagram posts? And by telling other people about my fundraiser?

Bless her, my Mum has become my biggest advocate. Yesterday she even persuaded her hairdresser and daughter to donate to my cause and they’ve never even seen a photo of Sophia to know what they’ve signed up to!

Ripple effects – I’m proving how effective taking a small daily action can be.

What small positive action can you include in your daily routine, that might turn into a huge cumulative impact?

Do something, anything. Even just giving someone else a smile everyday can cause the ripple effect.

Have a lovely day 😁 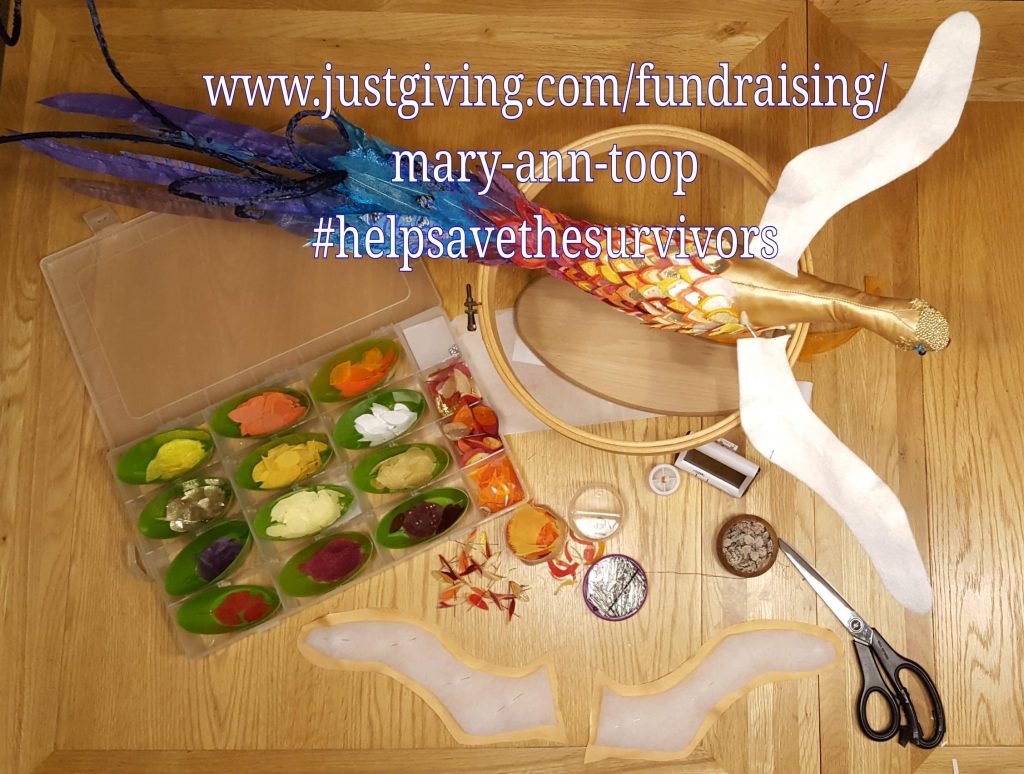 I had my family visiting for the weekend and spent a wonderful day with them. As a result I had a very late creative hour, adding feathers to Princess Sophia’s undercarriage.

I stupidly managed to burn myself cooking a roast dinner for the family to share before they headed off home. Several hours of cold water treatment for blistered finger tips wasn’t enough to allow me to sew. However, I was determined not to miss a single day of my project, so I spent my hour awkwardly assembling feathers ready for attaching instead.

At long last I began to work on Princess Sophia’s wings. And I took my first full length photograph of her to share with you.

I swear Princess Sophia looked as though she was grinning all day after I strengthened the wire armature and made her wing foundations.

Having her wing foundations in place allowed me to continue covering her body in feathers.

Yet more feathers sewn in place, all over her belly this time.

Princess Sophia’s plumage has reached the top of her wing joints.

Other news: I’ve not forgotten my promise to share my creation from my weekend textile sculpture workshop with the lovely Bryony Jennings (http://www.prettyscruffy.com ) I’ve made progress but he’s still not quite finished. Hopefully I’ll share images of him in next weeks blog.

I’ve been unable to progress my plans much for securing a mentor to help guide my creative path, as the lovely lady is very poorly this week. Hopefully I’ll have more news next week.

And finally, a breakthrough this week. I am absolutely delighted to report that my lovely tolerant, supportive husband has decided he wants to help with my efforts. It’s quite ironic that the metaphor is spot on too. He will be creating a suitable stand to support Princess Sophia, allowing her to fly 😁💕💕💕 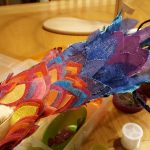 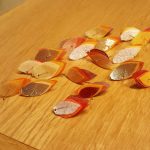 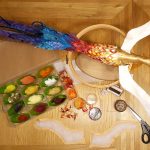 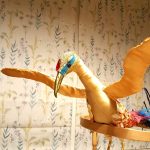 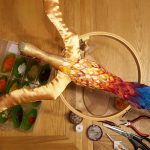 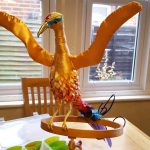 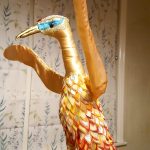