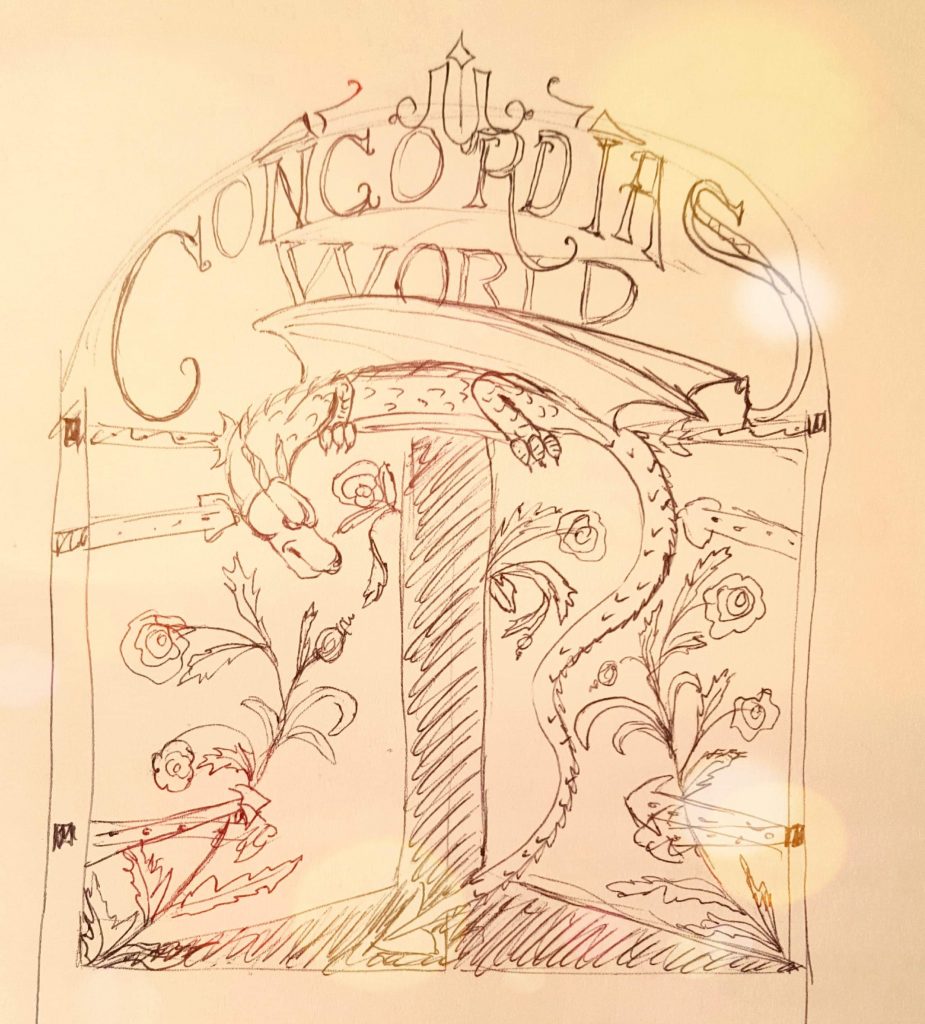 The doors to Concordia’s World are opening

This week has been quite simply magical.

In last weeks blog I wrote about dreaming of being able to create textile sculptured creatures and characters that are as special, as magical in real life, as they are in the visions in my head. Well this week that dream took a huge leap forward.

Last weekend I spent three blissful days in the company of the hugely talented artist Bryony Jennings, learning the techniques she uses to bring her amazing textile sculptures to life.

I had so eagerly waited for this event, anticipating just how important it would be. I had no idea just how much I would learn and how many doors of future opportunity would be opened.

In hindsight things could have gone badly wrong. From the moment I learned of the workshop and Mr T bought my place as my Christmas present, I knew exactly what I would create. I had this idea of creating a dragon from my dads lovely old paisley patterned nightshirt. The nightshirt I hadn’t been able to let go when dad died. And the dragon would be a version of Bernie. Bernie is my cute little stone dragon that mum bought for me just days after dads death. I named him after dad.

On day one myself and four wonderful ladies on Bryony’s animal workshop, were taught how to create the basic body form and how to begin sculpting facial features. Actually taking the scissors to dads nightshirt was challenging, but I got on with it. It did however mean that the first day was rather emotionally charged. The body went well but the sculpting of his face didn’t go well at all.

I slept badly, haunted by the ugly face I had created, its features far too large for the body. I woke bright and early on day two determined to put it right.

Driving down the motorway on the one hour trip to the workshop location, listening to Classical FM on the radio, I hit a huge wave of emotion as Debussy’s Clare du Lune began. The last time I had heard it was at dads funeral. Synchronicity perhaps?

Okay Dad, I thought, I’m listening. Thanks for your company. Give me a hand today please?

I arrived at the workshop before everyone else, more determined than ever. By the time Bryony and the others arrived ten minutes later, I had already removed the offending face that I’d spent three hours on the day before. For the next hour I barely said a word, but I transformed my little creature, letting the fabric tell me what it needed and wanted to do. I was no longer creating a dragon.

I had told the other lovely ladies on the workshop about my phoenix project and they were keen to meet her, so I had taken Princess Sophia with me. Bryony’s reaction was overwhelming, saying that I clearly didn’t need her help and couldn’t understand why I was at her workshop. She asked my permission and took Sophia outside to photograph, asking if it would be okay for her to share the images on her social media? And to think I’d agonised over how to ask lovely Bryony for her support in advertising my fundraiser!

As day three came to a close, the other ladies and I marvelled at how our scraps of fabric had turned into these amazing creatures under Bryony’s guidance. Each one had its own very distinctive personality. None of them were quite finished, but Bryony quite rightly insisted on grouping them all together for photographs. Aren’t they all quite amazing? 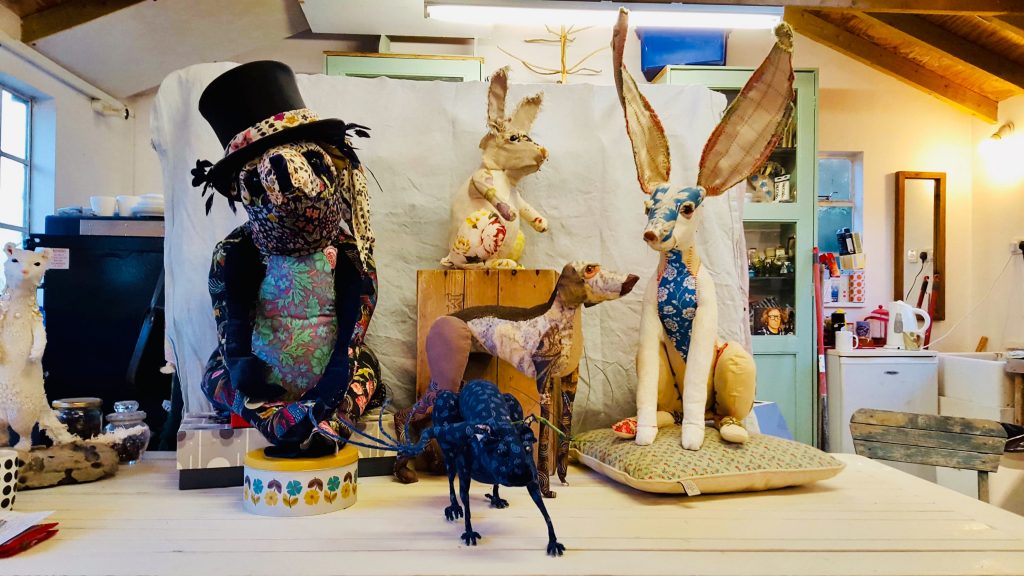 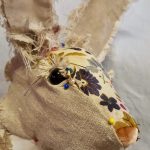 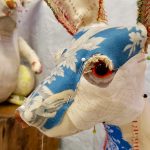 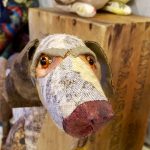 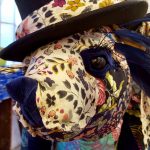 The icing on the cake? Bryony said she’d love to have my little creature come live at her house! What an amazing compliment.

I’m rather glad that my own little dark creature isn’t clearly visible in the photos. I’ve been working on him this week alongside Sophia. She hasn’t seemed to mind sharing my work table with him at all. He has a real glint to his eyes, just like dad.

He’s not quite finished, so I’ll wait until next weekend before sharing final photographs of him and revealing who and what he is.

My head is now full of endless possibilities for the creatures I can create with my new skills. I’ve never been so happy or full of optimism for the future of Concordia’s World.

At this point in my weekly blog update, I usually detail what I have achieved each day. However, each of the last seven days have been very similar. So suffice to say that from days 57 to 63 (hours 57 to 63) of my 100 day creative challenge, I have made and added lots and lots of Princess Sophia’s feathers.

What I have found interesting is how much more efficient I’ve become with the repetition. My first feathers were very time-consuming to make as each one was individually made, complete with its own shaft/ quill. However, I quickly realised that the detail became lost in the layering process. Plus it would be impossible to create the sheer number of feathers required in the timescale I’ve set myself. So my feather production has evolved. I now mass produce them, trimming each one into a better, more appropriate shape only when necessary.

I’ve also become more organised. This has mainly resulted from having the family descend for a visit this weekend. I knew that if I were to stand any chance at all, of keeping to my creative hour each day, that I would need to be better organised. It’s amazing how much more efficient this has made me. Another lesson learned for my future productivity!

This week I have also taken a leap of faith. I have approached an artist and asked her to mentor me, to help me become the artist I long to be. She has responded. Eek! More on that next week.

And I’ve begun to cast my net more widely to help promote my fund-raiser. Some initial messages have been sent out to influential contacts. Its nerve-wracking waiting to see if I receive any replies.

And I have sought permission and will begin working on Princess Sophia in the local library. I have lots of other venues I’d like to explore working in too.

So this week has been full of opportunities.

Lovely readers, I do hope you are making the most of the opportunities you’ve been offered too? Life is far too short to worry what other people think.

Stop worrying and enjoy your life. Make the most of every exciting opportunity that comes your way. It’s scary but so exciting. 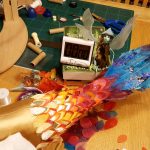 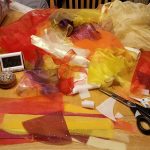 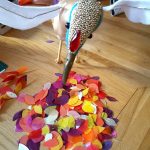 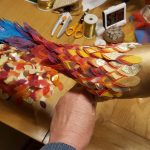 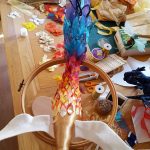 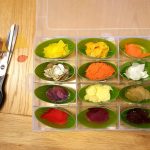 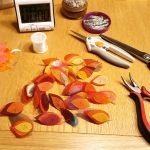