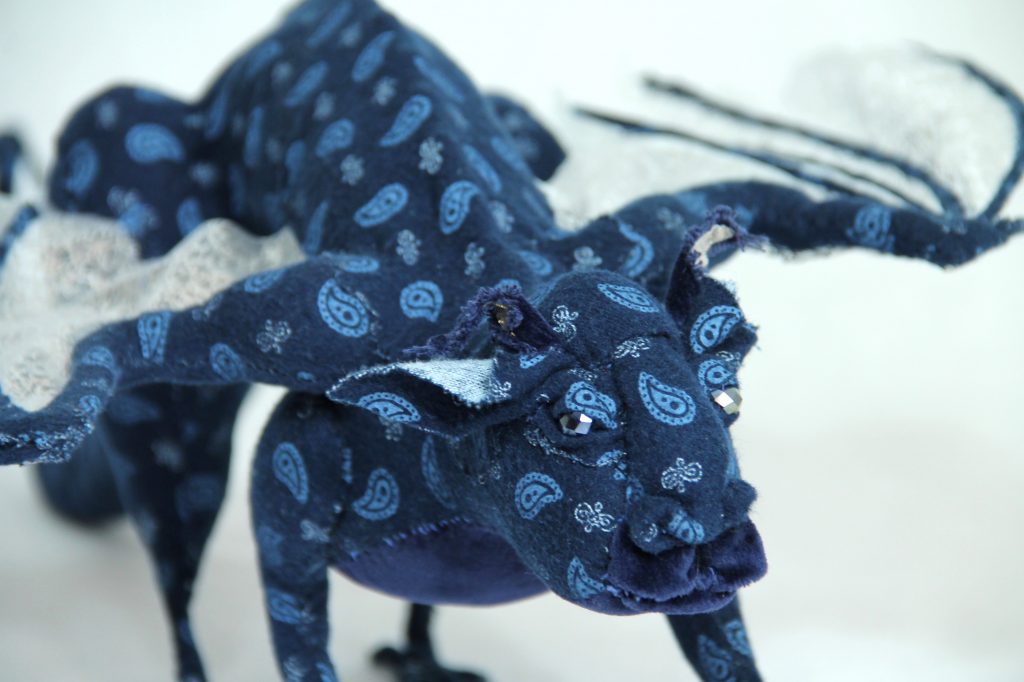 You may recall that last year I made a gargoyle, a very special gargoyle I named Servo.

I’m sure that you also know by now that each of my creations seems to take on a life of their own and develop complete personalities as they evolve. All of them that is, except Servo.

I know very little about him. He has this quiet presence, not at all menacing, well not to me anyway. I simply feel comforted knowing he’s around.

Servo is made from my dads beautiful old nightshirt. Servo is my protector, my guardian. I like to think he’s also the guardian of Concordia’s World, protecting it from evil spirits. He watches over everything that happens in my studio from his home, high up on one of the storage cabinets.

Earlier this summer, my local church announced they were to hold an art competition with the theme All Creatures Great and Small.

Yes, the organiser said, we are accepting textile entries.

I had never entered any sort of art competition before. It was just a small local competition but I was still nervous about the idea of entering and having one of my creations judged.

I went away on holiday, having done nothing about my possible entry. The deadline was just two days after my return home. The argument continued to play out in my head. What should I enter? Would a dragon be acceptable? It is a church competition after all.

An hour before the deadline, I dashed to submit my entry. I took four pieces with me, thinking I’d seek the advice of the organiser about which to submit.

Wow. All four pieces were accepted! My Winter Dragon, a large stumpwork embroidered cicada, my ‘Ring of Beetles’ stumpwork embroidery and Servo. I displayed them at the church, keeping my fingers crossed that nothing would happen to them as they were to stay there until the judging took place the following day.

I couldn’t bring myself to go along to the church and hear the comments, so instead I met with my wonderful writing group friends for our annual summer gathering. I returned home late afternoon, happily stuffed with delicious goodies, my head still ringing with fun and laughter. I spotted my creations on the dining room table immediately.

It transpired that my mum had gone along to see the exhibition and had bought them home for me at the end. I was grateful to know they were all safely back home where they belong. I wanted to know who had won too, but mum didn’t know.

Then I spotted the little bag alongside my creations. Had mum left it behind? I checked with her.

“No,” she said, “not mine. Someone at the church must have added it to the box when I collected them.”

I peered inside. A card? And a small gift?

I opened the card. “Congratulations on winning 1st Prize with Servo!”

I couldn’t believe it. Tingles shot up my spine. How incredibly appropriate. Not just that a gargoyle had won a church competition.

It was far more than that.

No one connected with the event knew Servos story and how he came into being.

So no one knew Servos connection with my dad.

No one knew about dads close connection with this church, that he married there and that although it was no longer their own local church, he and mum had renewed their vows there just a couple of years ago to celebrate 60 years of marriage.

That just last year we had held his funeral there. And of course that he’s now resting in its cemetery.

I have constantly felt dads presence since making Servo. I’m sure it’s not just in my imagination. He really is watching over me.

Tears of gratitude and wonder streamed down my face. My gargoyle, made with dads nightshirt, had won.

How amazing is that?