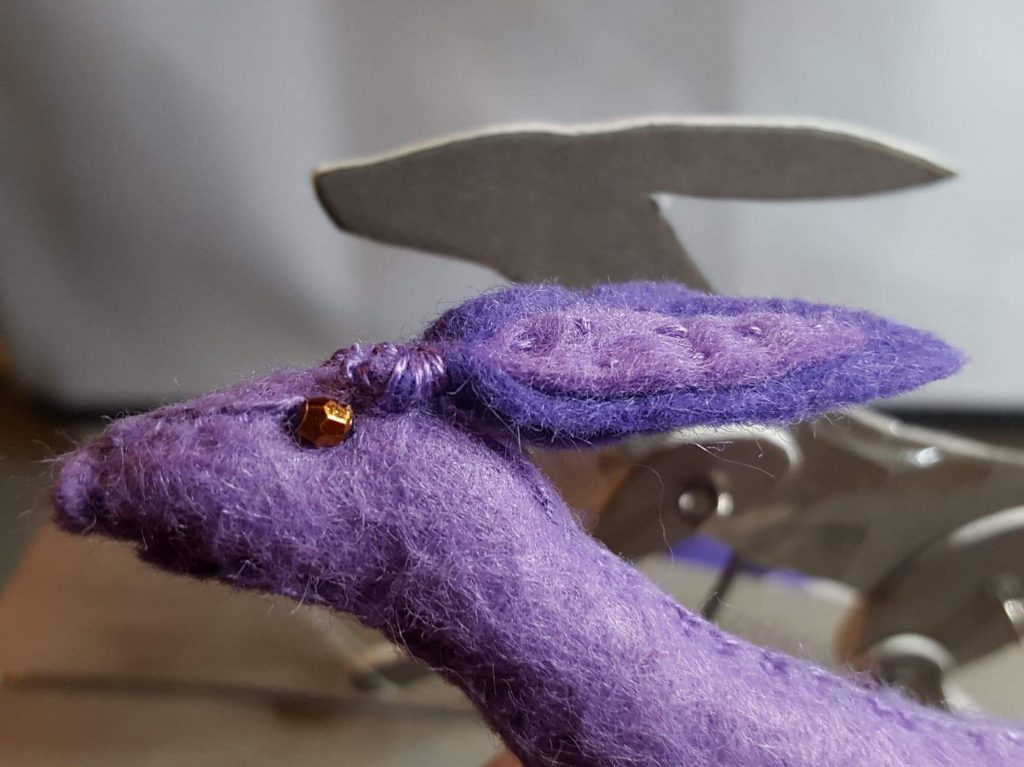 Expectation is the root of all heartache – William Shakespeare

Sometimes I wonder what on Earth I’m doing. Sometimes? No, not just sometimes, most of the time.

But sometimes my chosen direction seems more,….. well more difficult and more challenging than at others.

When I first began this latest hair-brained 100 day project of mine, I was full of enthusiasm and brimming over with ideas. I knew I’d hit mental roadblocks along the way, it goes with the territory of embarking on a long-term project. However, I didn’t expect to hit one so soon.

I was absolutely delighted with the end result of my butterfly automata and pleased with my hare prototype. Creating the textile hare automata is proving to be far more challenging than I thought though.

Making a tiny textile sculptured creature is so much more challenging than a large one. Whilst the construction principles remain the same, the very woven nature of most fabric is at odds with being cut into such tiny pattern pieces. The fabric frays and distorts dreadfully. This week has taught me why it is that small fabric items, like dolls clothes and miniature teddies, are often made with purpose designed or especially tightly woven, high quality fabric. Since I don’t own any fabric of this type, I’ve been making do with what I do have. Much to my frustration, I’ve resorted to using some scraps of cheap felt.

My frustration has been eating away at my motivation. What I’m currently creating doesn’t meet my expectations, it’s not good enough. The result is that I’ve found myself not making much progress at all.

I’ve had a little inner voice taunting me.

“You aren’t really enjoying this, so why bother? Let’s do this, or that, instead”.

“Its not good enough, you don’t like it, let’s do something else?”

“You could do that now but the washing /cleaning/ shopping needs doing, so do that later. You’ve got all day”

“Lets have a break for five minutes and have a cuppa. And you could always read for a break whilst its cooling down?

“You’ve not spent much family time this week, you could watch so-and-so on tv”.

I’m sure you get the idea? The voice keeps niggling away, messing with my thought processes, tempting me to simply give up, give in, go and curl up with a nice cup of tea and a good book instead of knuckling down to get the hare automata finished.

And some of the time that’s exactly what I’ve done. However, I’m soon back to worrying about my lack of progress and annoyed with myself for giving in so easily.

By Wednesday, the third day of problems, I found myself resorting to meditation to break the endless cycle of next-to-no progress. It had been quite a while since my last meditation.

I pushed myself away from my workstation, closed my eyes and began the process. First concentrating on my deep breathing, then slowing it down, gradually relaxing every part of my body. Then I began the staircase decent.

On every previous meditation I have envisioned a beautiful white marble winding staircase. With each downward step I become more and more relaxed until I reach the most beautiful calm room at the base of the staircase. The room is light and airy and has a big comfortable armchair where I snuggle up in front of the warm open fire. I then gaze into the flames and escape into Concordia’s World. Or sometimes Concordia’s World appears outside the window or the rooms walls miraculously disappear.

However, on this occasion, my imagination removed the beautiful staircase and replaced it with what I can only describe as a dark rabbit burrow, with stairs spiralling endlessly down around its walls. I worryingly felt that if I were to trip, I would end up tumbling into the central void, into oblivion.

Or so I thought.

The uneven nature of the steps meant I soon found myself quite literally tumbling, Alice in Wonderland style, directly into Concordia’s World. No beautiful room, no comfortable chair, no warm fireplace.

My brain obviously decided I was in far too much of a rush to be bothered with the slow staircase decent and pleasant room. No, let’s just chuck her in.

Strangely, I wasn’t at all put out by the tumble.

Now Concordia’s World is rather beautiful. It feels a bit like I imagine Alice’s Wonderland to be, only more wild. A comfortable garden lounger under a tree beckoned to me, but before I could reach it I spotted a familiar shape in the sky. Dancing in the beautiful endless blue above the trees, Concordia swooped and dived. As she came ever closer I could see she had something trailing under her. Was she carrying something? Perhaps in her back claws? What on Earth was it I wondered? I couldn’t quite make it out.

As she flew closer still, I could finally see she had a creature cling to her tail. Concordia was taking great delight in flinging it around as much as possible, not at all concerned if it should fall off. I could hear it’s squeals of protest as it struggled to hold on.

Eventually my beautiful blue dragon friend landed in front of me. I rushed to greet her, it really had been far too long. As I disentangled myself from her warm hugs I peered inquiringly behind her.

“Who or what is that?” I asked, indicating to the little thing still clinging to her tail. It was small and human-like that reminded me of a mischievous and far less lovable version of Dobby from Harry Potter.

“Oh that?” Concordia replied, “Don’t you recognise him?”

She gave her tail a good flick sending the creature flying through the air over the tops of the trees and out of sight, it giggled and sniggered with glee the whole time. “That’s the Procrastination Pixie, didn’t you recognise him?”

Ah, the penny dropped. That’s who’s been causing all my problems this week!

It’s quite simple really. My actual achievements aren’t matching up to my expectations and my frustrations have encouraged the Procrastination Pixie to come out to play. Or rather to irritate me.

And to give him his due, he’s done a very good job this week. He’s been particularly hard at work causing me all sorts of strife. He comes out to play whenever a project starts to become too difficult. His interference creates a real temptation to abandon what I’m doing.

So why do I put myself through his torment?

Whilst the Procrastination Pixie is an annoying little devil, I also know that ignoring him and pushing through the mental barriers he creates, has a way of forcing my brain and imagination to come up with solutions to the problems I’m facing. He doesn’t like it of course and pushes back even harder, trying every possible trick in the book to stop me. He’s very, very sneaky. Sometimes, telling his voice apart from my own inner creative child’s is extremely difficult. He’s an amazing mimic!

Do I wish he wouldn’t interfere?

No, not really. Without him, I know I wouldn’t push myself. He’s like an annoying little friend that it’s impossible to be rid of. I don’t ever miss him when he’s not around, but he makes himself known when he’s needed.

Thanks to Concordia I finally realised what was happening. It still took another day for him to go back into hiding again though.

On Thursday I had an important deadline looming so I spent the whole day finishing my winter dragon. He needed to be complete in time to be included, as part of the New Forest Textile Groups display, at this weekends Brockenhurst Needlework Fiesta. 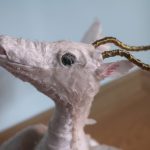 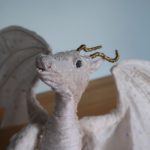 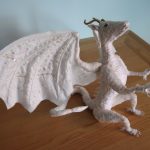 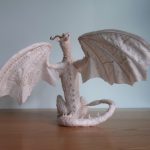 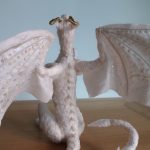 Working on and completing my dragon seems to have broken the Procrastination Pixie’s hold on me. When I returned to work on my hare late last evening after a long and tiring day, he was nowhere to be seen. Or heard!

Whilst writing this I’m sure I heard a little voice say:

“You could have made life much easier for yourself if you’d created a much larger hare. The end result would be of a much better quality finish too.”

Bigger? Another hare? You’ve got to be kidding me! Oh do behave and go away again Procrastination Pixie! 😂

Until next week dear follower. 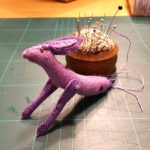 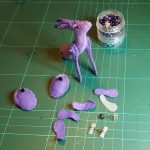 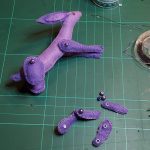 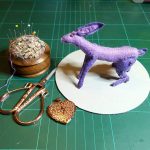 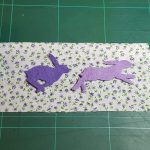 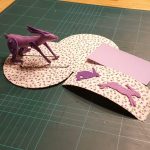