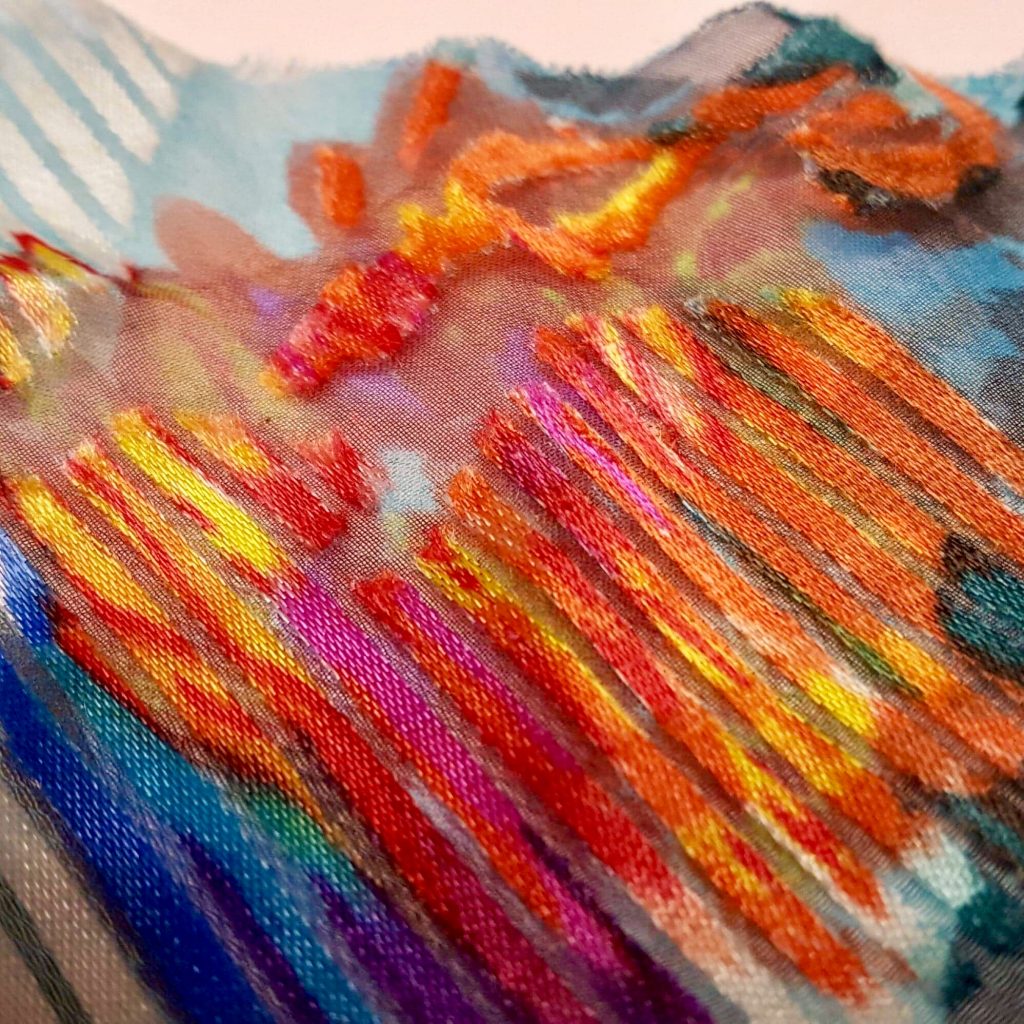 An Important Announcement and a New Lesson

This week my Phoenix, Princess Sophia, has an important announcement to make. She wants me to tell you what she was sent here to do. She is on a mission and she needs your help?

I also learned a valuable new lesson this week that I want to share with you. However, to include both would be too much for a single read, so I’ve split this weeks blog in two. Part two, Princess Sophia’s announcement, will be published tomorrow. So do look out for it? It’s big. Huge! And very, VERY important.

So first, my lesson:

When I first told my elderly mum that I would be creating a Phoenix, her response was “Like a Phoenix rising out of the flames? All reds and oranges?”. I’ve not been able to get her words out of my head.

Ever since this project began, I’ve been obsessed with the need to create believable, effective flames for my Phoenix. And that means using the colour orange. This is my least favourite colour. One that I shy away from using. I hated one of my early attempts to create a flame-coloured feather, made from a horrible garish mix of felt. The worst offender of this mix was the really disgustingly bright orange. For some reason the colour physically hurt me, it made me feel ill.

Having experimented galore this week, I concluded that I would somehow need to overcome my hatred of the colour. As I sat pondering what had caused this dislike, a strong childhood memory emerged.

When growing up, like many families, we didn’t have lots of money. Christmas and birthday presents were a real and rare treat. One Christmas, when I was about eight years old, I was given a beautiful little diary. It was the first diary I had ever owned and I felt so grown up to have been given one, so it felt special. Precious.

Shortly after Christmas, before I’d even had a chance to write in my precious diary, a local girl who I’d instinctively always been rather wary of came round to my house to play for the first time. I remember so vividly playing in my bedroom, when I looked round with horror to see that she had scribbled bright orange felt-tip pen over the beautiful white and turquoise velvet fabric cover of my diary. I don’t recall what happened next, only that I was distraught. Isn’t it strange how memories can be so powerful?

I questioned if this was where my hatred of the colour began? It seemed likely. In an effort to banish the memory, I decided to see if I could re-frame it. In short, I did the unthinkable and reenacted the moment.

I recently helped a good friend to shorten a stunning pure silk dress for a wedding she was attending. She gave me the length of spare fabric as a thank you. You guessed it – the dress was a mix of turquoise green and white. A little different from my diary, but the closest fabric I own. The very idea of destroying this beautiful piece of fabric by scribbling on it with my bright orange sharpie, made me feel physically sick. What on earth would my dear friend Julia think of the way I was contemplating using her beautiful fabric? 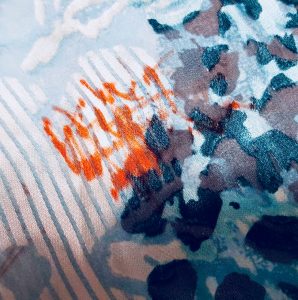 With a deep breath and shaking hands, I closed my eyes and just did it. I looked down and wanted to cry. Instead, I began colouring. Lots of the hated bright garish orange and then introducing other bright complimentary shades. I had absolutely no idea what I was doing, other than I was trying to blend the colours to make the orange more appealing. And to hide the horrid scribble.

After a short time I decided I’d had enough. I wasn’t at all sure my experiment had worked so I put the fabric to one side to try another tactic. I created a board on Pinterest with the name ‘Embrace Orange’. I typed “orange” in the search bar and spent ten minutes adding all the most beautiful orange images I could find to my board. When I finished I glanced up at my coloured-in fabric and was shocked to see an abstract image emerge. It was a metallic plate with a ball of flames erupting from it, the blur of green smudges in the fabric design blending to form smoke clouds above the flames. 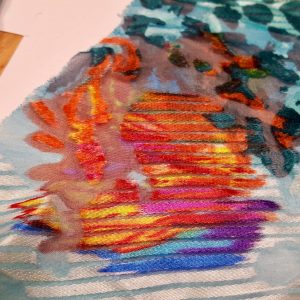 Since then I’ve been merrily colouring in, painting fabric and trying to recreate the same vibrant colour palette for the feathers of my Phoenix. Including the most beautiful vibrant shades of orange.

When I told my mum the story yesterday and showed her the image I had created, she made another profound comment. “You’ve sent that memory up in flames!” The metaphor hadn’t even occurred to me.

In a strange way I actually feel gratitude towards that horrid girl and her careless disregard for the property of others. Without her I wouldn’t have learned that I could reframe old hurtful memories. And I wouldn’t be using the essential colour orange in my phoenix.

I know that this story is just about my old hatred of a beautiful colour. However, the lesson is a valuable one. After all, if I can reframe a horrid memory and turn it to something beautiful, what other hurtful memories might I be able to reframe and change in this way?

Do you have any hurtful old memories that continue to plague you? Could you perhaps do something to reframe them?

My phoenix progress for this week:

Day / hour 36 – I continued to make a mix of blue and purple feathers.

And the germ of an idea began to emerge about what would happen to my Phoenix once finished.

Day / hour 37 – I attempted once more to create flames, this time out of chiffon and voile.

It was also an important day as I discovered the name of my Phoenix, Sophia, and she informed me in no uncertain terms why she is here. More on that in tomorrow’s blog.

Day / hour 38 – was the day I learned to embrace the colour orange. In using the marker pens to break through my horrid memory, it dawned on me that I could use pens or paint to create the colour effects I needed for flames. So I spent time experimenting once more and created a textile flame that I was happier with.

Day / hour 39 – I returned to creating Sophia’s tail, adding the blue and purple feathers I had made earlier.

Day / hour 40 – I began creating smaller feathers in some of the other shades from Sophia’s new vibrant colour palette.

Day / hour 41 – realising that I wasn’t happy with the position of the five small turquoise feathers I had added, I removed them. I then created and added lots of new feathers, before repositioning the turquoise ones. When I wrote my Facebook and Instagram post, I found myself seeing Sophia twirling around enjoying her new, over-the-top tail. “Don’t you think I deserve a flamboyant tail befitting my future role as Queen of the Skies?” She asked, with real attitude. I think I’ll have my hands full with this particular off-spring!

Sophia, or should I say Her Royal Highness Princess Sophia, is really beginning to come to life. 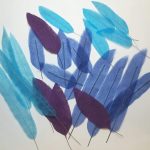 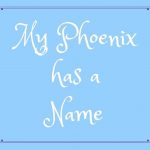 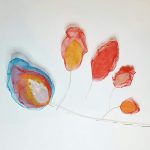 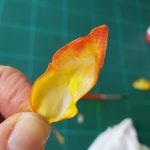 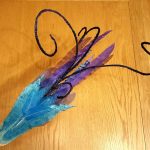 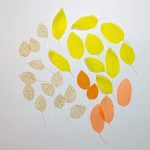 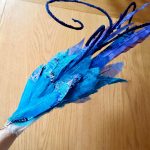 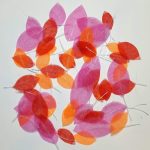