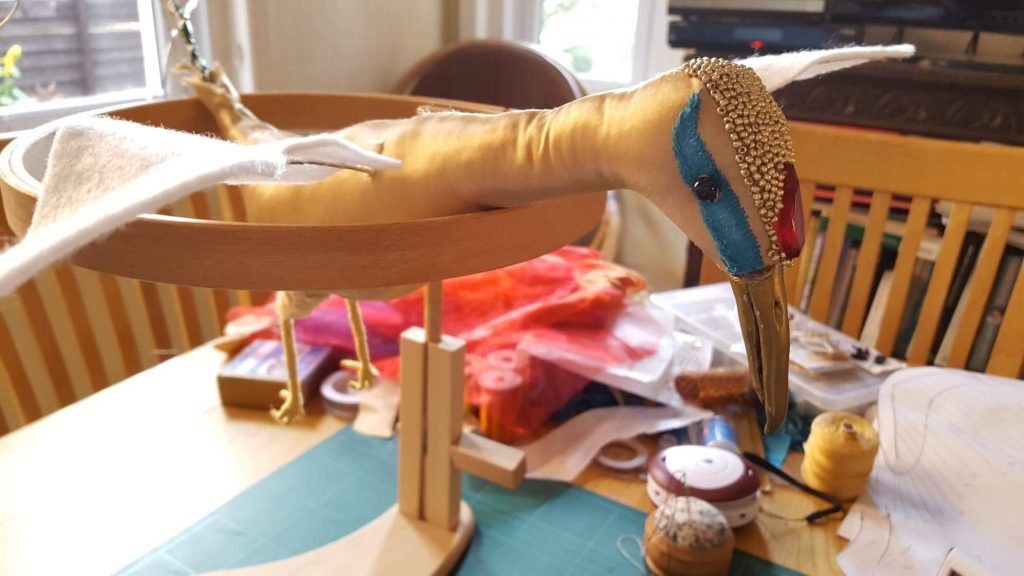 This morning as I sit to write this weeks update, I’m feeling extraordinarily blessed.

Some mornings when I write my morning gratitude, although it’s genuine, it’s not the same as the gratitude that I feel today. The sort that makes tears run down my face.

Why do I feel this way?

I genuinely feel like I’m beginning to live my dream.

It’s still early days but for the first time in so long, I can realistically see a way ahead. It’s as though a pathway, that has been blocked since childhood, has been cleared to let me pass.

You know the bit in Sleeping Beauty, where the Prince is easily able to cut down the thorns that have thwarted all previous attempts to breakthrough, to enter the magical castle where the Princess lays waiting? It’s like that. Only the thorns are magically melting away.

An opportunity has presented itself that I’m hoping will make so many more of my ideas a reality. But I don’t want to give the game away. Not just yet anyway.

The response from friends and family to my Phoenix project this week has been wonderfully supportive. I am so grateful to everyone for their kind comments and words of encouragement.

I am also full of gratitude to my inner creative child. I love the way she takes over, enabling my creations to evolve. Although I know what I want to create and have a vague idea in my head what my finished character will look like, it’s not until She emerges to actually begin work on a project, that I begin to fully appreciate how it will look when complete. It’s almost as though the character is creating itself.

And as She works, I see more and more of the individual. The experience is similar to the way I feel when I’ve perhaps heard about someone in conversation and I may have caught a fleeting glance of their image in a photograph. It’s not until I meet them in the flesh that I really begin to get to know them?

And it’s more than that. Working on each character I don’t just find out who they are, their likes and their attitude to life. I develop a clear picture in my head of not just their outward appearance but their personality and quirky traits too. And when I begin writing about them, their very reason for existing emerges.

Slightly crazy I know, but I positively live for these moments. Hence my gratitude.

So what have I actually achieved this week?

Day 16 I finished sewing and stuffing my Phoenix

Day 17 I began decorating his head

Day 18 I began sewing masses of tiny gold beads onto the crown of his head. Both he and his personality started to come alive from this point, marked by him gently reminding me of a dream I’d had about him weeks ago, in which he had a very symbolic vermilion jewel on his forehead. What reminded me? Finding an exact red jewel alongside the gold beads in my box of beads. Of course it was precisely the right size and shape too.

On Day 19 I finished the beading and gave him eyes to watch my progress.

Day 20 was a strange day of searching, experimenting, then realising he desperately wanted me to begin creating his wings.

Day 21 despite the fact that I was keen to make a start on his plumage, he asked me very politely if I could possibly create his tail first? He explained that he couldn’t possibly begin learning to fly without one now could he?

And so this morning, he’s supported on an embroidery hoop and stand, as the curly wire armature of his new tail means he is prevented from existing in any position except that of flight.

Ah, he’s just offered me another clue. I’ve just realised that he must be like the Iranian and Turkish mythical Huma bird. It’s very similar to the Phoenix in many respects. I love the myths connected with this bird though.

The Huma bird never lands and lives his entire life flying invisibly above the earth. His shadow or touch is auspicious and is thought to bestow kingship. This kingship, although often thought of in its literal sense, can also be translated in a spiritual dimension: when a persons thoughts evolve to an extent that they break all limitation, then he/she becomes a king.

Isn’t that a wonderful thought?

And I can’t help but notice that my Phoenix or Huma bird looks incredibly content today.

He’s learning to fly, just as I long to. 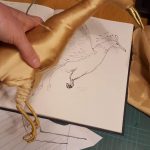 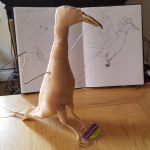 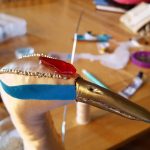 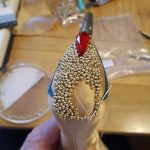 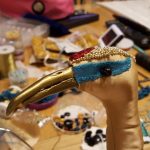 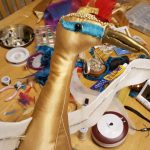 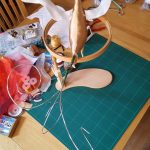 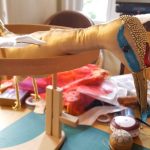