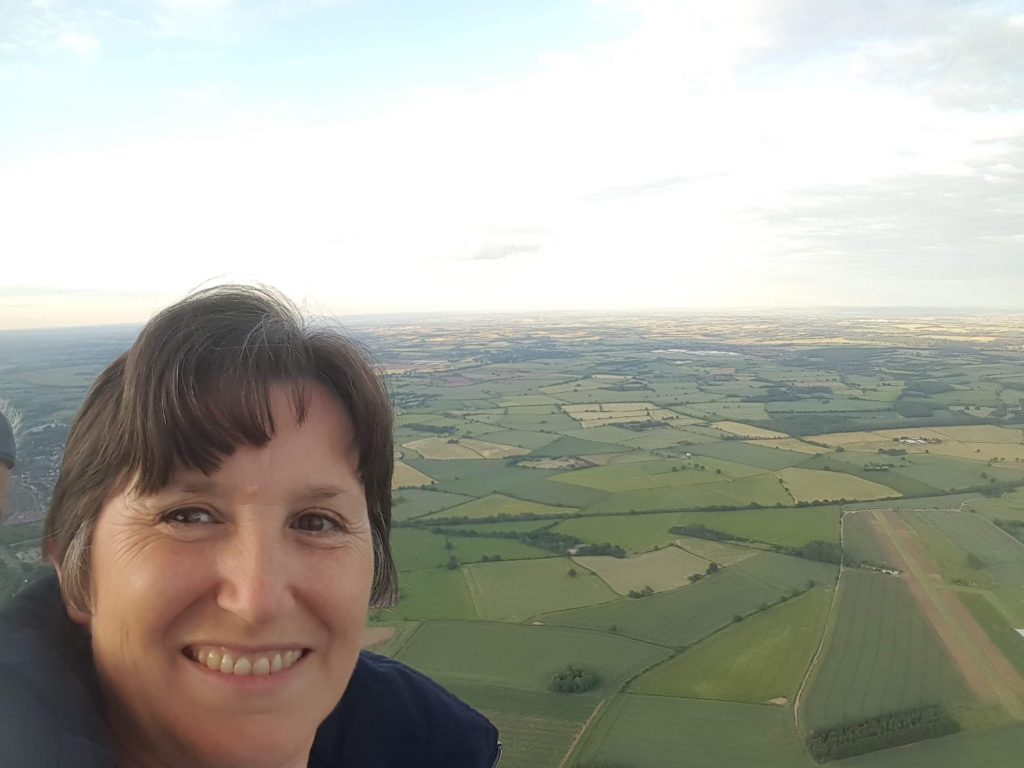 Who knows where the idea came from? For someone who’s been afraid of heights since childhood, it seemed like a crazy idea. Perhaps it was watching wonderful films like David Niven’s version of Around the World in 80 Days as a child? Or the Nimble bread advert? As a young adult I used to love going along to the Southampton Balloon Festival and would watch wistfully as the balloons took off. I even had a pair of curtains hung at our landing window for years, which were covered in ornate, Victorian style hot air balloons.

So why has it taken so long for it to happen? Perhaps because it was a selfish wish, something just for me. I met Ian before I had my first proper job. Riding in a hot air balloon was never of any interest to him and so although the longing remained, the trip never happened.

I don’t know if Ian even realised how much I’d wanted to go. I think it may have been one of the children who finally made him aware.

When I opened the little present he gave me at Christmas, one of those Experience Days certificates, I burst into tears and couldn’t speak for several minutes.

Then came the trepidation. How could the experience possibly match up to my dreams?

I spent hours looking up the various venues around the country because I was constrained by the operators included in the deal.

I had originally wanted to fly over the Bath area but I wasn’t impressed by the reviews for the company operating there. So I looked further afield. I discovered  excellent reviews for a company called Wickers World operating over the Cotswolds and Warwick area. It was a risky strategy as rides are frequently rescheduled five or six times before the weather conditions are just right for flying.

With fingers crossed, I chose a date and booked an evening flight. Ian and I booked the afternoon off work and then the wait began.

As the precious date approached I watched the long term weather forecasts anxiously. It was looking good.

A week or so before, our son and daughter-in-law announced that they needed to stay over, for just one night, as they had a local wedding to attend. It was the same night as the flight. Knowing that their journey from the north would take them nearby, I suggested that they might like to join Dad for an evening meal whilst I was flying? If the flight was cancelled they could come direct to us.

The weather looked promising. Arrangements in place, dog care booked, we waited for the 2pm deadline to find out if my flight was going ahead. Just before two, my mobile pinged. The flight was on!

I was so excited I could barely contain myself. We finished getting ready and set off at a leisurely pace. The flight wasn’t until 7pm. 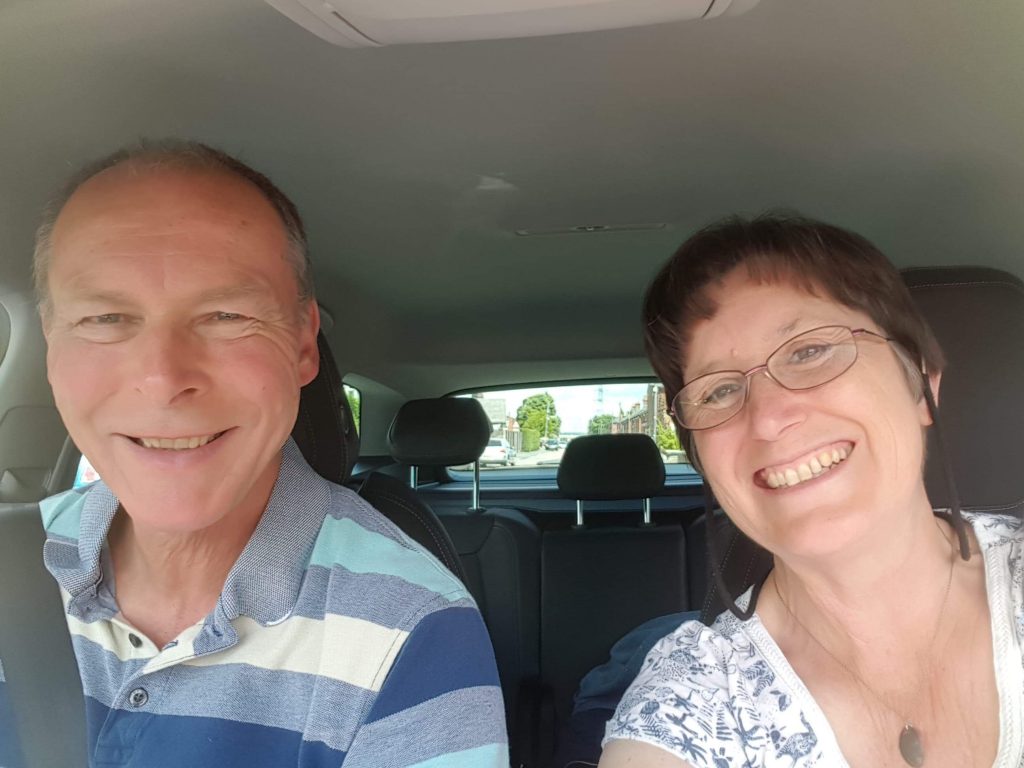 Heading north, for once the cars satnav was my friend. It diverted us off the main A34 due to heavy traffic, so we found ourselves meandering through the beautiful Cotswold countryside instead. Fifteen minutes or so from our destination, we stopped at a lovely pub for a drink. Then back in the car for the short ride to Stratford upon Avon’s race course.

As we arrived I had a moments panic. A hot air balloon was inflating already. Was I late?

As we followed another car across the race trace to the centre of the field, it’s driver signalled to us. He was the pilot of my balloon. We were the first to arrive.

I sat eating a quick sandwich watching the other balloon take off and ride very lazily across the sky. 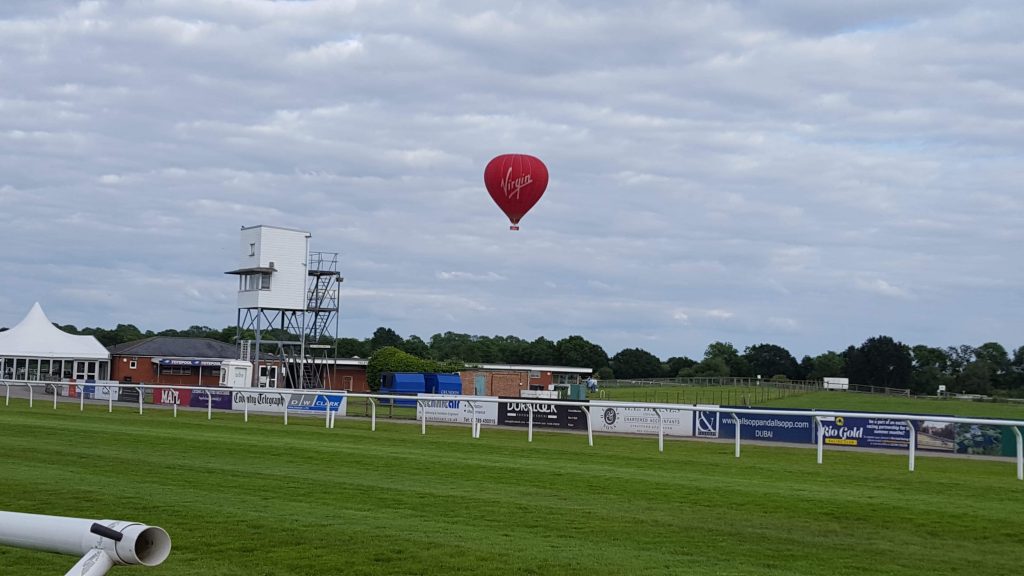 A land rover towing a large trailer pulled into the field. Then it felt as though time speeded up.

In no time at all, the other passengers arrived, a second land rover appeared and the balloon was rolled out over the ground. A huge wicker basket was laid on its side at its base, then the large fans began the inflation process. Oh my goodness this was really happening!

The pilot very sternly told us our flight instructions. So many passengers – how on earth would we all fit?

As the enormous ninety foot balloon reached a certain point, still on its side, the fierce and extremely loud burner was turned on. I was reminded of my children’s favourite bedtime story, The Grumpalump as the balloon began to fill with air.

“And then the Grumpalump began to rise. It grew lumps and bumps and bits and bobs, and still the Gnu blew.” 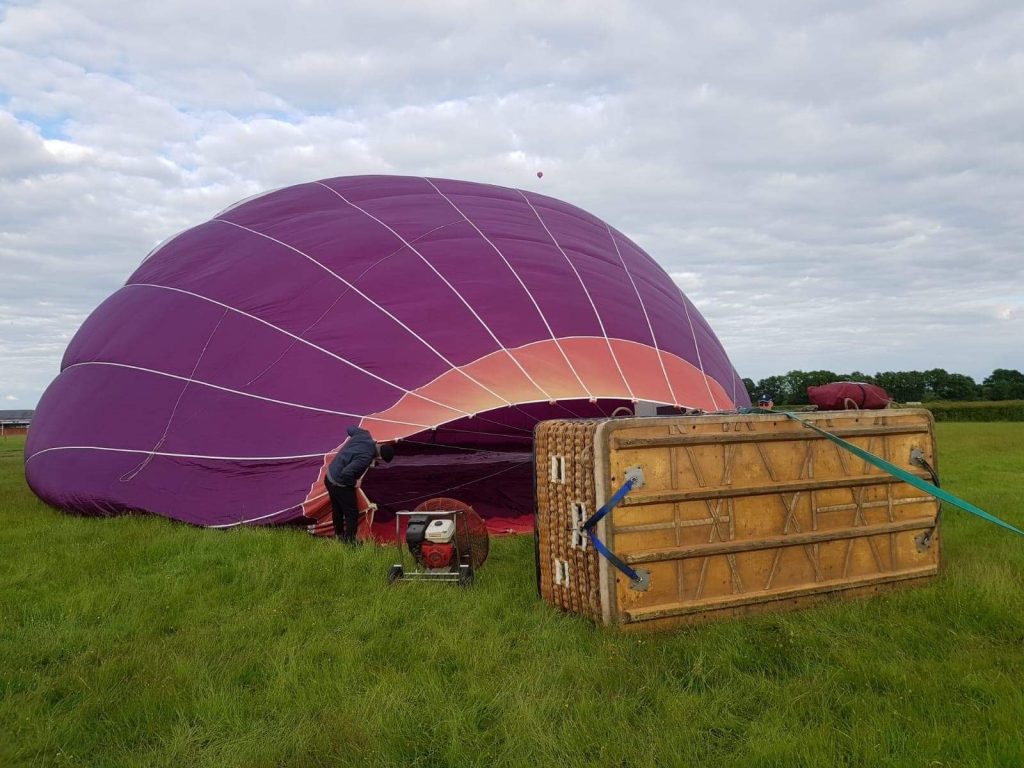 The balloon righted itself, pulling the basket upright in the process. We scrambled aboard, some of us in a more ungainly fashion than others, using the specially designed holes in the baskets sides. 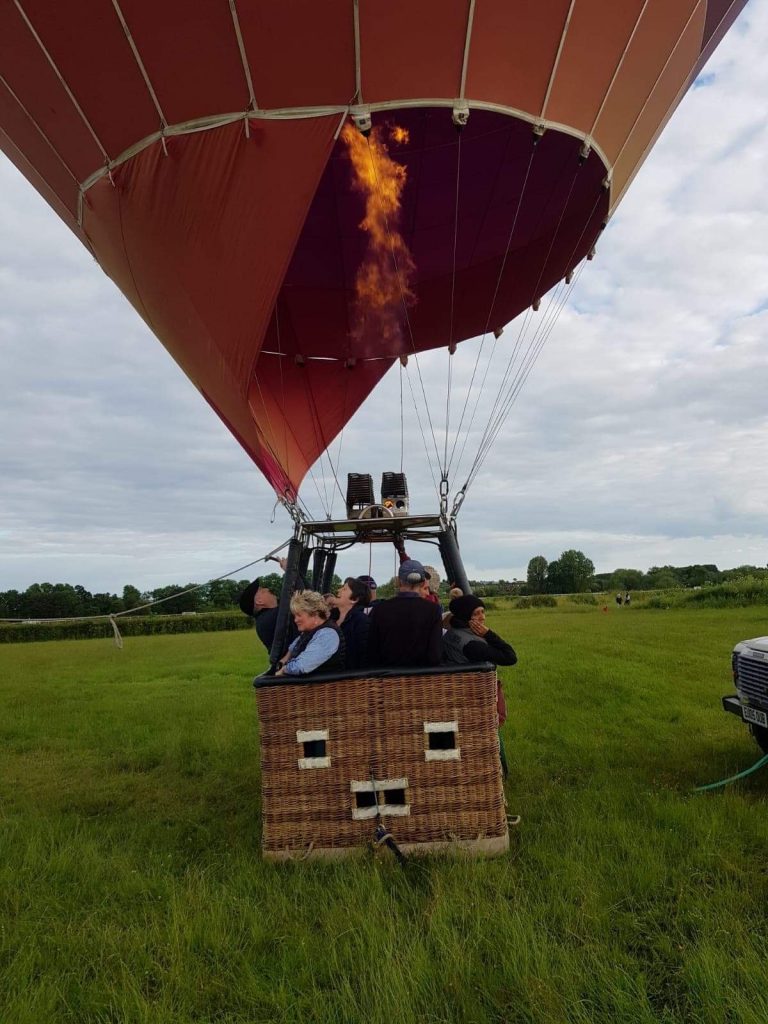 I could just begin to feel the balloons tug at gravity as my son and daughter-in-law appeared, strolling across the field to watch our departure. I don’t know why but it felt so important for them to witness the event too.

Grinning like a mad thing and waving like crazy, fear was the last thing on my mind as we ascended. Slowly but surely we climbed in altitude, up into the summer solstice evening air. Then slowly, oh so slowly, we hung there, suspended, as the merest hint of a breeze carried us high above the race course. With a final wave, I watched as the three figures below began to wander away, off to find a suitable place to eat. 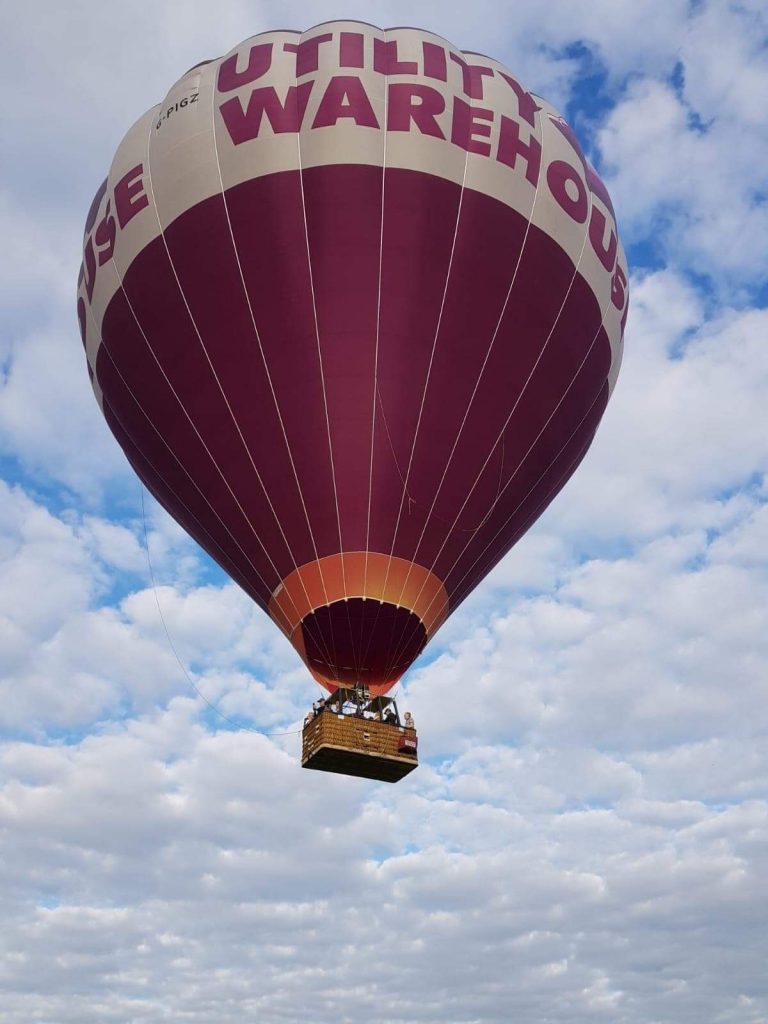 We continued to climb. The noise of the burner was deafening in the still night. I hadn’t given it much thought beforehand. I suppose I had envisioned the stillness of being in the open air that high off the ground. The true peace and quiet that I long for most days that constantly seems to evade me was there for sure, but I came to enjoy the burner too. It encouraged a kind of reverent hush as it was impossible to hear anyone speak above the noise.

Hanging there above Shakespeares birthplace and the river, it was as if time itself had ground to a halt. It was so quiet, so utterly beautiful.

We climbed yet further as the pilot searched for a breeze to carry us away. With such near perfect conditions, the views were absolutely spectacular.

At three and a half thousand feet we could see Birmingham in the distance. The fields and tiny villages in the near vicinity were like something out of a fairytale. Such a beautiful patchwork that worked their magic to render the viewers near speechless. 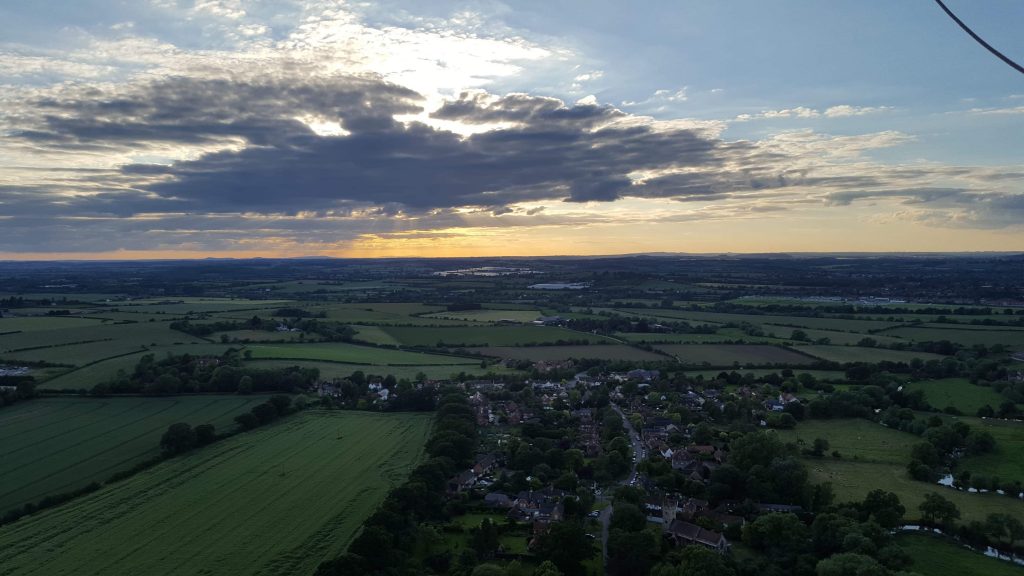 Cameras that had been deployed since the outset, hung unused as everyone took in the  three hundred and sixty degree views. It was breathtaking.

The pilot eventually scanned the land below for a suitable landing spot and we began to descend. Our barely moving pace ground to a near standstill as he desperately tried to edge us to a suitable field. The three below us had full crops. Their owner wouldn’t be at all happy if we demolished them so we rose once more. We moved a little and we tried again, descending to hover only ten meters further along. Still no good.

The fields were adjacent to the most stunning old Manor House, surrounded in part by trees. As we hung low over the property, it’s owner appeared in a clearing below. He called to us, telling the pilot to feel free to land in his grounds. 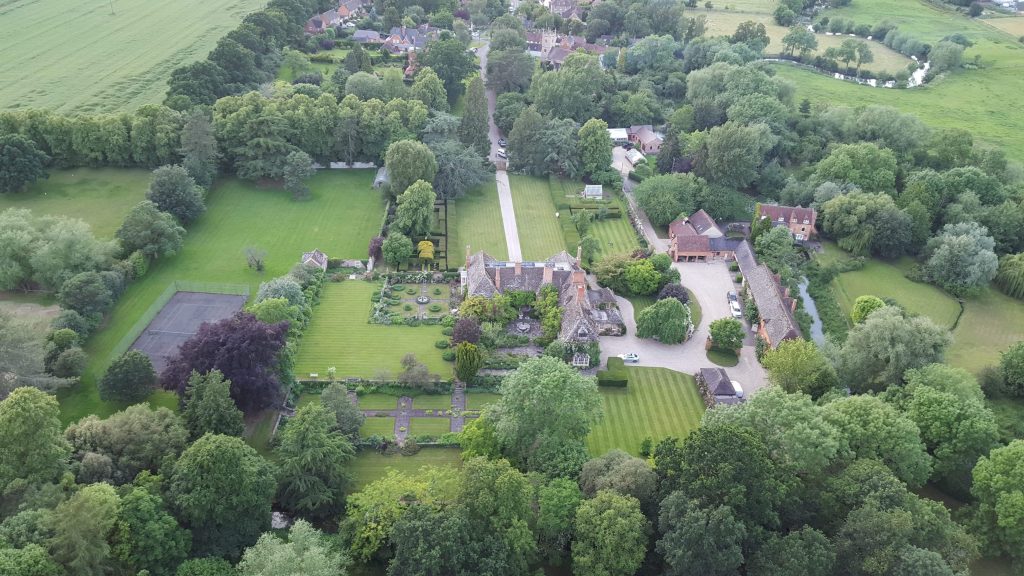 The balloon refused to comply. Almost colliding with the tops of trees, we eventually set down in a field on the other side, to the accompaniment of a very merry band of mobile home holiday makers, singing Fly me to the Moon. With a very gentle hop we landed. No great thud, no toppling basket. It was a perfect.

The holiday makers and the wealthy landowner came to greet us so we had a very warm welcome back to earth.

The perfect end, to a fabulous life experience.

Did it match my expectations? Oh yes. I’ll never forget it. Not ever! 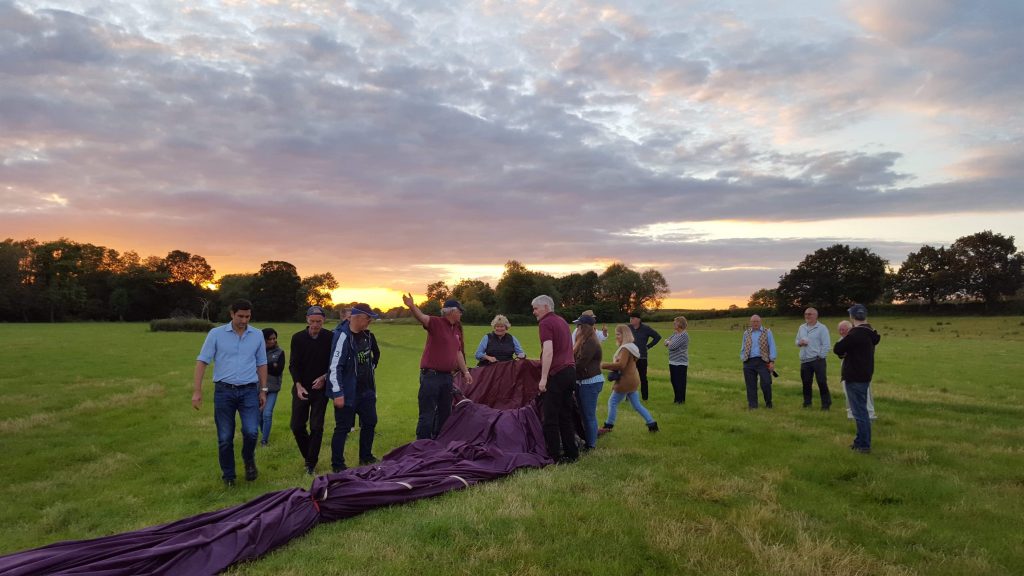