The Half Way Point 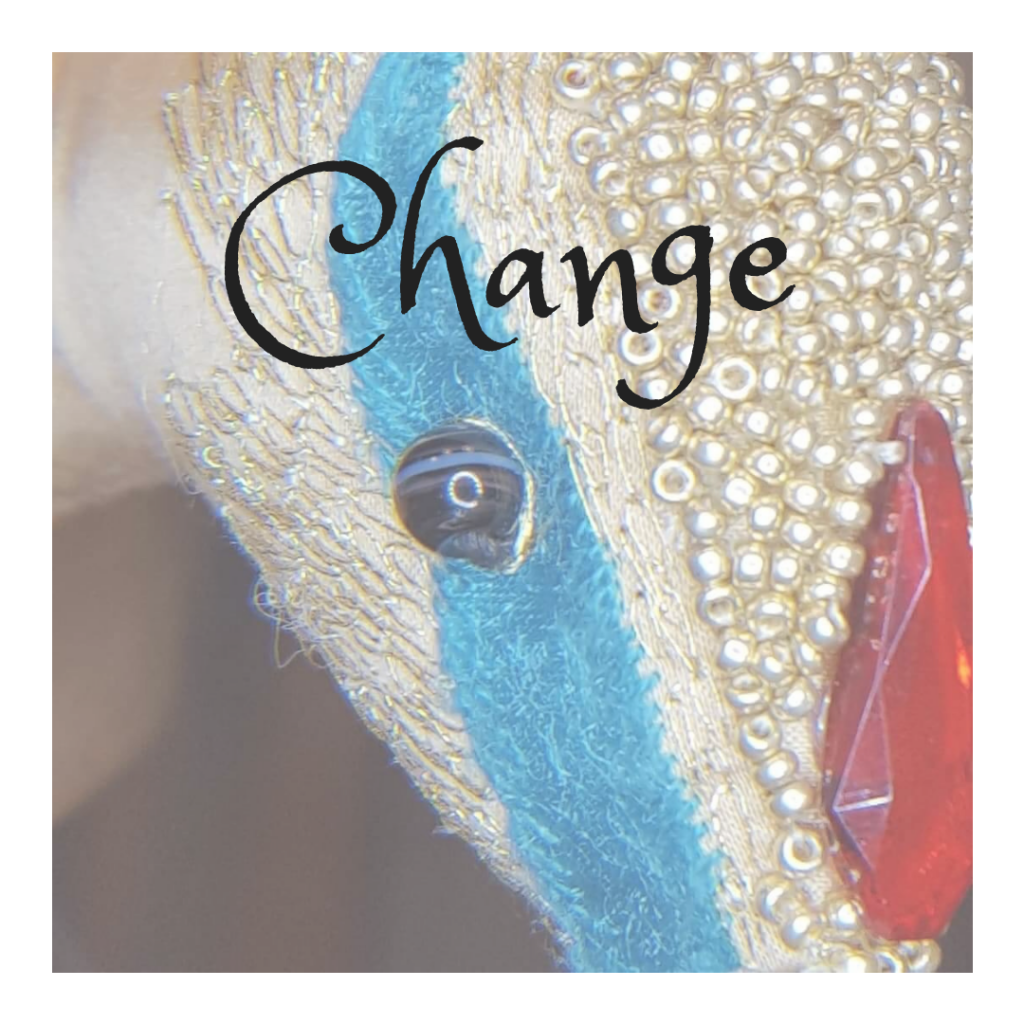 The Half Way Point – Change

Sometimes we forget, in our struggle to move forward, to glance back at where we’ve been and to see just how far we’ve travelled. In doing so, it can often help us to see where we are headed.

I had no idea seven weeks ago, when I began this journey, where it would take me. Even now it’s as though I’m only just beginning to glimpse at the possibilities.

On Friday 31st August, I had the word ‘change’ ringing in my head. I was relatively happy but becoming increasingly frustrated that my dreams for Concordia’s World felt as though they were on hold. There was never any time to make them a reality. I knew that I needed to take fairly bold action if anything different were to occur. So I came up with the notion of carving out just an hour a day to dedicate to my dreams.

For a very, very long time I felt as though I was sleep-walking my way through life. It’s strange how sometimes we need the biggest kick up the pants before we really begin living?

I feel as though I have finally begun to ‘wake up’ over the past few years since recovering from depression. I’ve been following my inner instincts wherever and whenever possible, allowing them to take the lead to see where they might take me. The change in my life has been huge. But the constant, insistent nagging intuition that I could be doing more, being more creative, remained. So on the final day of August I concluded that it was time for yet another change.

Sometimes when we embark on a new venture, when we focus on creating something new, we forget that this needs space. Space is a pre-requisite for growth. It is inevitable that squeezing a new ‘something’ into an already busy life will require change in all areas of our life to make space for it.

I had absolutely no idea when I embarked on this journey, how it would impact and change the other areas of my life.

For much of this journey, you’ve only seen the creative results. Well I can tell you now that the rest of my life is slowly transforming itself too.

My wonderfully supportive husband, who I’m sure often has absolutely no idea why I’m doing what I feel driven to do, has simply accepted this new routine. He never complains when I disappear to spend time in my other world. Princess Sophia has more or less taken over our dining room, but he’s happy for her to remain there rather than be packed away each day. He knows what I’m doing is important to me and never suggests for a moment, even when he can see that I’m way too tired to be spending time creating, that I should forget about her for a day. He simply accepts that I’m doing what I need to do. And I’m so very grateful for that. However, I’ve noticed other changes in him too. He’s become far more open to new ideas and accepting of change, even to the point of becoming the instigator himself.

Another change has been my sleep. I’ve always believed that I need eight hours of sleep a day. It’s a belief that’s been drummed into me since childhood. So I’ve been absolutely astonished that I’m now waking up early, and by that I mean I’m often awake and up well before six. No alarm necessary. In the past I’ve often struggled to wake up, even with the alarm, for seven.

My mood has been at an all time high. Constantly. And I’m full of energy. I can’t wait to get started each day.

I’ve lost weight too. Who would have thought that would happen?

Suddenly, over the past few weeks our home, which has been sadly neglected for years, is undergoing a massive change too. The colour scheme of Concordia’s World seems to be making its way into every room in the house. Over the past two weeks my tired, 30-year-old kitchen has begun to undergo the biggest change imaginable. I’m finally getting the kitchen I’ve dreamt of for over ten years. And it’s all being done on a shoe-string budget. Bargains galore seem to be finding their way to me. After struggling previously to find good tradesmen, I’ve had the most amazing luck with discovering both a plumber and electrician who were both available exactly when I’ve needed them. They didn’t charge the earth either. Whoever heard of that happening?

Princess Sophia has given me so much, is making so much possible, that I knew I needed to give something back. And that something was her.

My daughter and closest friends are quite frankly amazed that I’m able to let her go. All the work and effort, the love that has gone into her creation. Why, how, can I give that away? I’ve never felt able to let go of my creations before. So what’s changed?

The universe has given me so much over the past few weeks. But on 28th September, thousands of people in Indonesia had loved ones and everything they owned snatched away from them by first an earthquake, then a tsunami. I can’t even begin to imagine what that would feel like, or why this particular disaster on the other side of the world has affected me as deeply as it has. I only know that I want to help. The only thing that seems appropriate to give, that comes from my very heart and soul, is Sophia. My beloved Princess Sophia, whose name in Latin means Wisdom.

She’s a change maker. A life changer. At the end of this 100 days, when she’s finished changing my life, it will be time for her to fly off and help change the lives of others.

So I am pleading with the universe for people to hear my plea. I’ve received so much already, been given so much. Do I dare ask for more? Yes.

For the victims of Indonesia, yes I’m asking. I’m daring to consider going bigger, wider with my shout. Princess Sophia is demanding an audience and I will be doing everything I can to give her the biggest one I can.

If you’ve read this, please will you help? Please share my blog? Please bring me your ideas? How can I give Princess Sophia and her cause the audience she deserves?

Looking back at what I’ve achieved in 50 days, I can’t even begin to dare imagine where the next 50 will take me.

My progress this week:

Day 44 / hour 44 – after an exhausting day helping my son to move home, I knew I was too tired to use the iron or do anything too much, so I kept my efforts simple by cutting up fabric strips ready for more feather making.

Day 45 / hour 45 – I discovered some beautiful fabric in one of my many storage boxes and turned it into some stunning, colour changing, feathers.

Day 46 / hour 46 – I turned my pre-cut strips of fabric into yet more feathers, trying to get the fire coloured mix right. But I knew I was stalling, I’m not sure why.

Day 47 / hour 47 – I realised I’d not been giving Sophia my full and undivided attention (my kitchen re-build had been distracting me). After giving me a good telling off, she set me to work and pointed me in the direction of the fabric that was missing from her colour palette. I then had fun creating a flame of coloured feathers for her approval.

Day 48 / hour 48 – Princess Sophia pointed to the missing feathers on her undercarriage, she wasn’t quite ready to receive her flames yet. So I made and attached them.

Day 49 / hour 49 – I began pinning feathers in place. Perhaps it was looking after my wonderful grandson for the day that distracted me? The colours are right, I know they are, but the arrangement of them looked too contrived. Princess Sophia completely agreed so has asked me to remove them and to try a new layout. 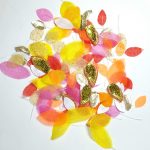 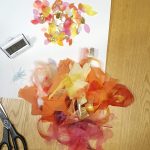 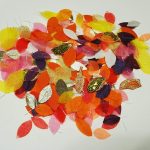 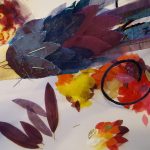 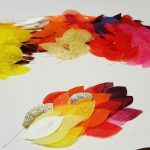 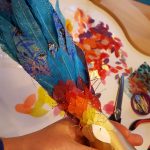 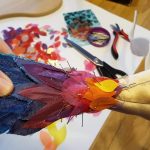 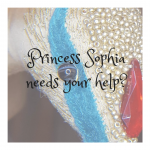